Sikhs protest the cutting of a prison inmate's hair; seek action from officials

Gangster Rajveer has alleged harassment by the jail authority while the former was being produced before a local court Author : Tushar Singh 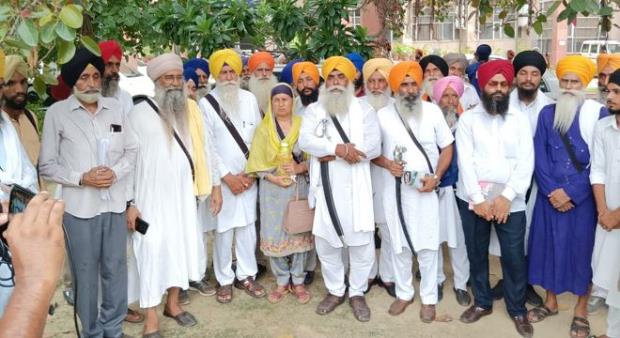 Several Sikh outfits protested against the alleged cutting of hair of an inmate at the Bathinda Central Jail. SSP and DC Bathinda were handed over with a memorandum by the leaders of these outfits demanding action against those responsible for cutting the hair of gangster Rajveer Singh.
The SGPC deeply condemned the incident and asked for strict action to be taken against the perpetrators, last week. President of Dal Khalsa, Baba Hardeep Singh, Lakhbir Singh from Satkar Sabha, and Baldev Singh Sirsa with other supporters and members from multiple Sikh organizations assembled near Ambedkar Chowk and launched a procession against the case before submitting the memorandum to the senior officials of police and city administration.
A week ago as per several media reports, gangster Rajveer along with his aides and other inmate had allegedly beaten up the warden of the jail they are locked in (Bathinda Central Jail). When Rajveer was produced before a local court for the hearing, he while talking to the media, had complained about the alleged harassment by the jail authorities.