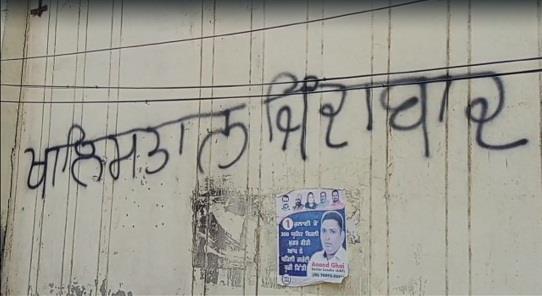 Punjab Chief Minister Bhagwant Singh Mann and Aam Aadmi Party supremo Arvind Kejriwal are coming to Jalandhar. Earlier, Sikhs for Justice chief Gurpatwant Singh Pannu had once again issued a threatening video, after which slogans of Khalistan Zindabad were seen written in the vicinity of Shaktipeeth Sri Devi Talab temple.
It may be mentioned here that Punjab Chief Minister Bhagwant Mann and Delhi Chief Minister Arvind Kejriwal are coming here from the Jalandhar bus stand to launch Punjab Roadways Volvo buses, which will go to Delhi Airport.
The fare will be half that of private buses. Meanwhile, strong security arrangements were made by the police administration. This incident exposes the shortcomings in the security of the Punjab Chief Minister.
Police reached the spot and cleared the slogans written on the walls. However, no explanation has been given by the police to the media so far. Earlier, 1200 clips of the railway tracks were stolen from the Rajpura thermal plant line. Which was taken over by the head of Sikhs for Justice. The thieves were nabbed by the police while solving the case. With this Gurpatwant's claims turned out to be false.