Sonakshi Sinha is engaged? Actress flaunts a diamond ring on her finger with a mystery man; Watch

Sonakshi Sinha is wearing a beautiful ring and while sharing this photo she wrote, 'It's a big day for me. My biggest dream is about to come true... and I can't wait to share it with you all.' 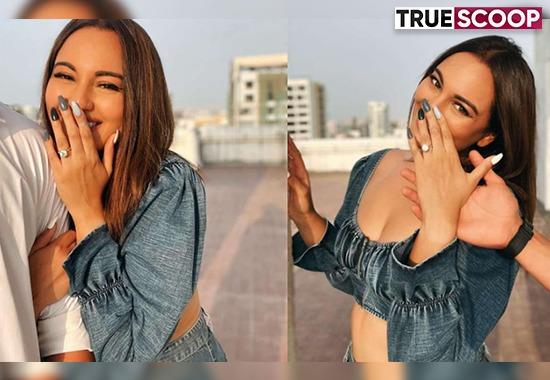 Sonakshi Sinha Is engaged: A picture of Bollywood actress Sonakshi Sinha has created a stir on social media. The actress has shared a recent picture of herself on Instagram in which she is seen holding someone's hand.
Sonakshi Sinha is wearing a beautiful ring and while sharing this photo she wrote, 'It's a big day for me. My biggest dream is about to come true... and I can't wait to share it with you all.'
An engagement ring is seen in hand!
Sonakshi Sinha wrote in the caption of the photo, 'Can't believe it was that easy.' After this post of Sonakshi Sinha, speculations are being made that maybe she is going to tie the knot.
Seeing the ring on her finger, it seems that he has gotten engaged. Many celebrities have commented on this post of her Celebs are giving best wishes!
Ananya Birla wrote in this post about Sonakshi Sinha's engagement, 'Whoo ..'. Farhan Akhtar's wife Shibani Dandekar wrote in the comment section, 'Good luck Sonakshi Love you so much.' Lakhs of fans have liked her post and people are also wishing her in the comment section.
Also Read: Celebs shower love on Priyanka Chopra, Nick Jonas' daughter's FIRST photo, 'Our Little Girl at Home'
However, the interesting thing is that Sonakshi Sinha has not revealed the face of the boy.
Who it can be?
Viral Bhayani also shared this picture on social media and wrote – Got engaged? Many fans gave their feedback in the comment section.
One user wrote - With whom? Salman Khan what! Another user wrote – Now do not say that with Salman Khan. One person wrote – I don't know why this seems to be a publicity stunt. Sonakshi's name has been associated with Salman Khan since the time of Dabangg.