Former captain Sanath Jayasuriya on Saturday joined thousands of protesters in Sri Lanka's commercial capital and demanded the resignation of President Gotabaya Rajapaksa amid the worst economic crisis in the island nation. 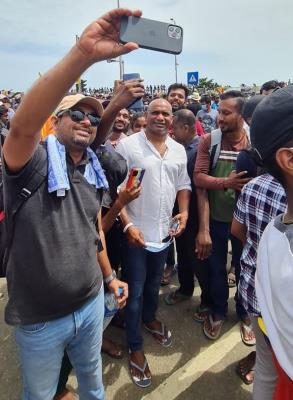 Former captain Sanath Jayasuriya on Saturday joined thousands of protesters in Sri Lanka's commercial capital and demanded the resignation of President Gotabaya Rajapaksa amid the worst economic crisis in the island nation. Thousands of protesters in Colombo broke through police barricades and stormed President Rajapaksa's official residence in one of the largest anti-government marches in the crisis-hit country this year.In the visuals, protesters, holding Sri Lankan flags and helmets were seen breaking into the President's residence, tearing down security cordons placed by police, taking a dip in the swimming pool and romping through his kitchen and home.The 53-year-old Jayasuriya said he always stands with the people of Sri Lanka adding that the people will celebrate victory soon."I always stand with the People of Sri Lanka. And will celebrate victory soon. This should be continued without any violation," he tweeted along with the pictures."The siege is over. Your bastion has fallen. Aragalaya and people power has won. Please have the dignity to resign now ! #GoHomeGota," the cricketer said in another tweet.Apart from Jayasurya, his former team-mates Kumara Sangakkara and Mahela Jayawardene have also been vocal against Rajapaksa and have lent support to the agitation. Sangakkara took to his official Twitter account to post a video of the Sri Lankan protests to express support for it, a post that Jayawardene also retweeted.While sharing the video, Sangakkara captioned the post, "This is for our future.""We as a country have changed direction and nothing can change that�people have spoken!! #GoHomeGota #peoplepower," tweeted Jayawardene.Notably, Rajapaksa who was facing calls for resignation since March was using the President's House as his residence and office since protesters came to occupy the entrance to his office in early April. According to reports, Gotabaya had already vacated the premises before the protests began in Colombo.Meanwhile, at least 30 persons including two police officers were injured during the ongoing protests and were admitted to the National Hospital in the capital.The island of 22 million people is struggling under a severe foreign exchange shortage that has limited essential imports of fuel, food and medicine, plunging it into the worst economic crisis since independence in 1948.Amid all the turmoil, Sri Lanka is hosting the Australia cricket team in a multi-format series. And on Saturday, thousands of angry Sri Lankans surrounded the Galle cricket stadium, where the second Test match was being played, to get the world's attention. With deafening and unrelenting chants, demonstrators stormed to the top of the 500-year-old fort overlooking the ground while others ringed the seaside venue. However, the play continued as usual on Day 2.The entire tour, first limited-overs matches and then the second Test, have gone on amid the backdrop of significant social unrest and deteriorating economic conditions which have not impacted play but have not gone unnoticed by the Aussies. The tourists also, however, pledged to play on and did so again on day two of the second Test.
Sri Lanka, who also hosted the Indian women's team in a white-ball series recently, are also due to host Asia Cup 2022 next month. While Sri Lanka Cricket (SLC) has affirmed that it is ready to host the tournament starting from August 27, only time will tell whether the country can host the Asian cricket event or not.