According to media reports, on Thursday, a group of protesters tried to remove the barricading at Polduva Junction near Parliament. 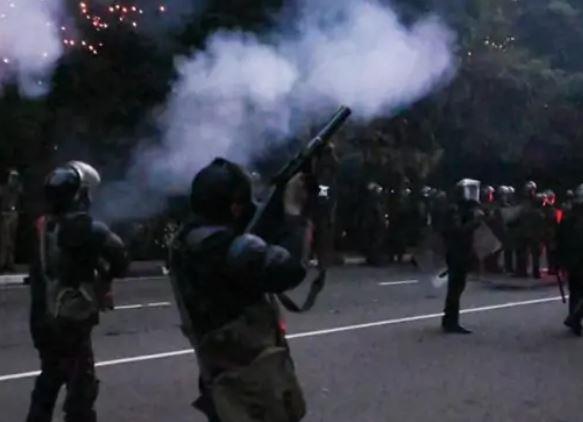 Police fired tear gas on students attempting to storm Sri Lanka’s Parliament Thursday as the protesters demanded the resignation of President Gotabaya Rajapaksa over the country’s worst-ever economic crisis.
According to media reports, on Thursday, a group of protesters tried to remove the barricading at Polduva Junction near Parliament. After which action was taken against them.
The President and his family have made it clear that they will not step down despite escalating demonstrations across the island.
Due to the economic crisis, there is also a shortage of petrol and diesel in Sri Lanka . Ceylon Petroleum Corporation (CPC) has issued a notification and fixed the limit for filling petrol. Now you can fill petrol up to Rs 2,000 in a motorcycle, Rs 3000 in a three-wheeler, up to Rs 8000 in a car, van and jeep. However, buses, lorries and commercial vehicles have been exempted.
Also read: B'desh sends emergency medical supplies to Sri Lanka
India is continuously helping Sri Lanka in this hour of crisis. India has helped about 23 thousand crore rupees since January under credit lines and credit swaps. Sri Lanka is also unable to pay for the import of food and fuel due to the economic crisis.