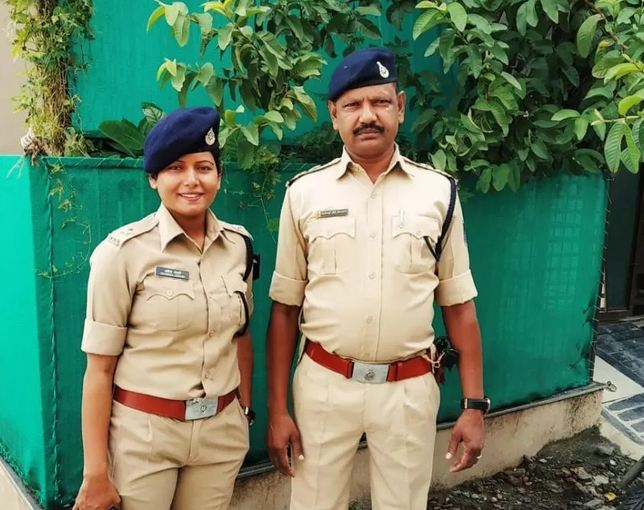 Dreams come true. When one works with indomitable courage, grit and determination, the ambitions and goals are bound to fall in line. Every parent hopes to see their children settle with a good job, if one talks about India, then the parents particularly want government job for their children. What better than working with your parent in same job environment but having different role.

Shabera Ansari thinks she is lucky to work with her father. Ansari is a Deputy Superintendent of Police (DSP) and her father is a Sub-Inspector in the same police station. All thanks to all India lockdown when the virus was at its peak.

Ansari hails from a middle-class family and she is a resident of Indore. She is currently posted at Women's Cell in Dewas, Madhya Pradesh as a DSP. After studying in a government school at Indore, she graduated from a government college. When she was in college, she got a proposal of marriage. As some people are wary of marriage, so she grew suspected.

Ansari thought if she would get marry early because she was 19 at that time, she would not be able to achieve something big in her life. In an interview and indianmasterminds.com quoted her as sayind, “I was a student of normal marks from school time. Once, I also failed in mathematics. When the proposal came at the age of 19, I became very intimidated. I decided to do something in my life and have not look back since.”

Ansari set a goal to crack UPSC exam. After a lot of hard work, she cleared one of the toughest exam in India in first go. After she cleared the exam, she was appointed as a trainee DSP in Sidhi district of Madhya Pradesh in 2018. She said, “My mother always supported me. I always had a little interest in working for the police force, since my father had been in the same service for many years.”

Ansari is the first woman from their entire family to have entered civil services. Now, she is an inspiration for children in her family and locality because they seek guidance from her. Educational institutes invite her to speak about her journey because now she has become a talk of the town. “I often counsel children of Muslim families. I tell everyone to study hard and trust themselves; hard work will definitely change things,” she added.

Ansari says her father is her idol. She also says that she has learnt a lot from her father. She thought she was lucky when she got to know that she would work with her father in the same police station.

Ansari's father is a sub-inspector at Lsaudiya police station, as per a report but Ansari and her father both struck in Sidhi district of MP due to nationwide lockdown. Her father had been to complete the last rites of his mother and he got struck due to the lockdown. The DGP of Madhya Pradesh, Vivek Johri ordered all those struck in different parts of the state to report at the nearest police stations for duty.

The order was special for the father-daughter duo. Now he has to report to her daughter. “He is reporting to me like other subordinates, and also mentoring and guiding me in every procedure at the police station as well as investigation at crime scenes. I couldn’t have got a better mentor than my father. At home, I’m getting the warmth of my parents and food cooked by my mother.”

Ansari says it is a dream to work with her father and sometimes she has to remind him to not treat her like senior at home. Although, they go on patrol together and this lockdown changed their life.