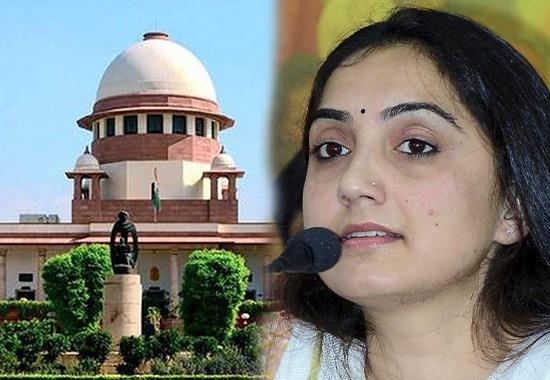 Supreme Court vs Nupur Sharma: The Supreme Court has strongly reprimanded Nupur Sharma for making a controversial statement about Prophet Mohammad. The court said that Nupur Sharma should apologize to the whole country. She alone is responsible for what is happening in the country. The court also reprimanded the TV channel showing the debate and the Delhi Police.
A two-judge bench of the Supreme Court said that Nupur Sharma has posed a threat to the security of the country. Her statement has created an atmosphere of unrest across the country. She came on television and made provocative remarks against a particular religion. The court said that Nupur Sharma tendered an apology with conditions, that too when the anger of the people had flared up over her statement. It's too late now to apologize.
Nupur Sharma had demanded from the Supreme Court that all the cases registered against her in different states should be transferred to Delhi. Supreme Court refuses to entertain a plea seeking transfer of FIR against Prophet Mohammad to Delhi after her remarks on Prophet. After this, the petition was withdrawn by Nupur Sharma.
5 quotes made by Justice Kant:
"She faces threats or she has become a security threat? This lady is single-handedly responsible for what is happening in the country," Justice Surya Kant said after Ms Sharma's lawyer said she has been getting threats, and it wouldn't be safe for her to travel now.
"We saw the debate on how she was incited. But the way she said all this and later says she was a lawyer. It is shameful. She should apologise to the whole country," he said.'
Also Read: Arrogant, obstinate & loose tongue', SC slams Nupur Sharma plea to club FIRs in row over religious remarks
Pulling up Delhi Police and the TV channel hosting the debate, the bench asked, "What has Delhi police done? Don't make us open our mouths, what was the TV debate about? Only to fan an agenda? Why did they choose a sub-judice topic?"
Questioning the police action in the case, the court said, "When you file FIRs against others, they are immediately arrested but when it's against you nobody has dared to touch you."
Slamming Ms Sharma further, the court said his remarks "show her obstinate and arrogant character". "What if she is the spokesperson of a party. She thinks she has back up of power and can make any statement without respect to the law of the land," Justice Surya Kant said.
What happened during the hearing.
Nupur's lawyer: She is joining the investigation. She didn't run away.
Supreme Court: Should you have a red carpet here? When you complain against someone, that person is arrested. No one dares to touch you because of your dominance.
Nupur's lawyer: Nupur is getting threats. It is not safe for them to travel at this time.
Supreme Court: Is Nupur receiving threats or is she a security threat? She is responsible for whatever is happening in the country.
Supreme Court: Nupur Sharma's remarks against Prophet were made either for cheap propaganda, political agenda or some nefarious activities. These are not religious people and give statements only to provoke. Such people do not respect other religions.
Supreme Court: This petition shows your arrogance. You went straight to the Supreme Court instead of the Lower Court. Magistrate courts across the country are small for you.