Looking at a sustainable food system in Punjab and Haryana, the country's prominent granaries, authorities in both the states have been advocating adapting the direct seeding of rice (DSR) technology to save the fast depleting groundwater table, besides encouraging late rice variety sowing in the kharif season. 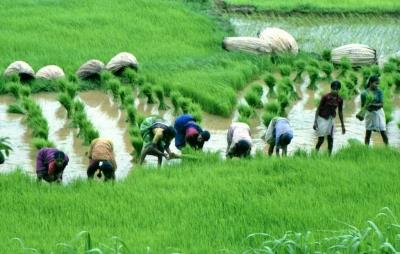 Looking at a sustainable food system in Punjab and Haryana, the country's prominent granaries, authorities in both the states have been advocating adapting the direct seeding of rice (DSR) technology to save the fast depleting groundwater table, besides encouraging late rice variety sowing in the kharif season. Using the DSR technique, one can mechanically drill paddy seeds directly into the field. The machine does the seeding of rice and spray of herbicide simultaneously.In the traditional method, farmers are first required to raise young plants in nurseries and then the plants are transplanted in a water-logged field.Studies say conventionally grown rice takes around 5,000 litres of water to produce one kg of rice. The DSR technique helps save up to 20 per cent water, besides saving labour cost and up to 25 per cent energy cost.The AAP government in Punjab is providing financial assistance of Rs 1,500 per acre to the farmers sowing paddy through the DSR technique, while the BJP government in Haryana is giving a cash incentive of Rs 4,000 per acre.Experts from the Agriculture and Farmers' Welfare Department have been motivating the farmers of 12 districts of Haryana to grow paddy through the DSR technique in the current cultivation season.Last week, Punjab Chief Minister Bhagwant Mann asked the Deputy Commissioners to launch an awareness and motivation campaign to promote the DSR technology to save groundwater, besides encouraging farmers to sow summer 'moong' and 'basmati' to give an impetus to crop diversification.This season Punjab has set a target to bring 30 lakh acres, out of a total area of 75 lakh acres of paddy cultivation, under the DSR technique. Around five lakh hectares out of the total area is expected to be brought under the highly remunerative basmati rice.In Haryana, the incentive-based DSR scheme is being implemented in 12 districts -- Ambala, Yamunanagar, Karnal, Kurukshetra, Kaithal, Panipat, Jind, Sonipat, Fatehabad, Sirsa, Rohtak and Hisar -- with a target of one lakh acres.As per official data, DSR-cultivated paddy plots will spread across 6,000 acres each in Yamunanagar, Panipat and Sonipat; 7,000 acres in Ambala; 8,000 acres each in Sirsa, Hisar, Rohtak; 9,000 acres in Fatehabad; 10,000 acres each in Karnal and Kurukshetra; and 11,000 acres each in Kaithal and Jind.As per official figures, around 12.50 lakh hectares was under paddy cultivation in 2021.According to experts, the basmati rice can be grown via DSR under non-puddle conditions and it can be done in almost all types of soils suitable for rice growing.Punjab is providing a power subsidy of Rs 7,200 crore (about Rs 17,000 per hectare) every year for over 14 lakh tubewells. However, Haryana does not give power subsidy to its farmers.The contribution of Punjab, with only 1.53 per cent of the total geographical area of India, is about 18 per cent of the country's wheat, 11 per cent paddy, 4.4 per cent cotton and 10 per cent milk.For the past many decades, Punjab has been contributing about 35-40 per cent of wheat and 25-30 per cent of rice to the central pool.Haryana has its own model to make the farmers prosperous.To ensure that the farmers become prosperous through crop diversification and eco-friendly techniques, it is providing them incentives.For this, the state government has introduced two schemes -- 'Mera Paani, Meri Virasat' and 'Kheti Khaali, Fir Bhi Khushali'.Under the 'Mera Paani, Meri Virasat' scheme, farmers switching over to an alternate crop in place of paddy are being given Rs 7,000 per acre incentive.The 'Kheti Khaali, Fir Bhi Khushali' scheme fetches Rs 7,000 per acre incentive to farmers, if they do not grow any crop in their field during the paddy season.Advocating the need to adopt the DSR technology, Haryana Chief Minister Manohar Lal Khattar told IANS that it is another unique initiative to give incentive and support to thousands of farmers who earn their livelihood through paddy cultivation."This will not only provide them a cost-effective method but also fetch them the desired exposure and education about the new techniques to strengthen their practices."Agricultural experts believe there are apprehensions between the younger and older generation about the success of the DSR technology in paddy cultivation.For decades, farmers have been using the conventional method of sowing paddy saplings in puddled fields. They are averse to opting for the new technique. In many cases, fathers pressed their sons to plough the fields after one or two weeks owing to misconceptions and sow the paddy using the traditional method.Farmer Gurdev Singh of Moga district has been successful in using the DSR technique in his 30 acres of land over the past two years."In the first year of the pandemic (2020), there was a huge shortage of labour owing to the nationwide lockdowns. Then we decided to go for the DSR technique for paddy plantation," he told IANS.According to him, the mechanical plantation not only saves money with the ever increasing input costs, wages and diesel prices but also saves irrigation water and power, besides early crop maturity.The Punjab Agricultural University (PAU) in Ludhiana has developed the late sowing of rice nursery, particularly the PR 126 paddy variety that could save up to seven billion cubic metres of water, besides saving power bills of nearly Rs 730 crore.PR 126 takes 123 days to mature if the crops are grown through the DSR technique, while Pusa 44 matures in at least 160 days after seeding.Some areas of Punjab, like the Mukerian and Ferozepur belts, do grow basmati. But most farmers end up growing common paddy, called 'jhona' as the input cost is less.
Source IANS