Swearing-in ceremony of AAP’s ministers tomorrow at 11 am; 10 ministers can take the oath 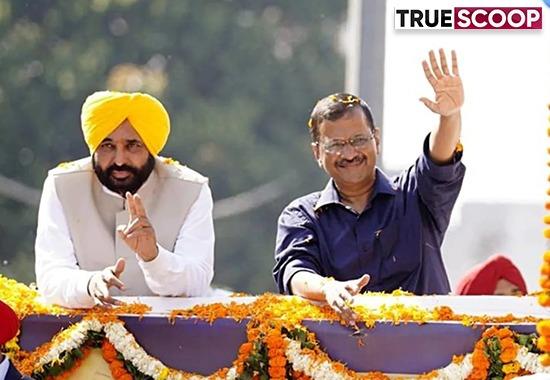 Aam Aadmi Party stalwart Bhagwant Mann on Wednesday sworn in as the 28th Chief Minister of Punjab in the presence of an august gathering, led by AAP national convener and Delhi Chief Minister Arvind Kejriwal.

Bhagwant Mann was administered the oath of secrecy and allegiance by Punjab Governor Banwarilal Purohit at the ancestral village of Shaheed-e-Azam Bhagat Singh amid lakhs of people from different walks of life.

Now the new ministers of the Aam Aadmi Party will take the oath tomorrow at 11 am at Raj Bhawan. Initially, 10 ministers will take the oath and after some time the expansion of the cabinet will take place. There is no formal list of names of the ministers is released yet. But during yesterday’s assembly session some MLAs were seen sitting on the seats of the ministers.
There are indications that these MLAs are going to be part of Mann’s new cabinet. These names are Harpal Cheema, Aman Arora, Kultar Singh Sandhwan, Narinder Kaur Bharaj, Prof. Baljinder Kaur, Sarvjit Kaur Manuke, Principal Budhram, Manjit Singh Bilaspur, and Dr. Baljit Kaur.
Apart from the CM, 17 ministers can be made in the Punjab government. After the oath ceremony, the first cabinet meeting of Punjab’s new government will be held under the leadership of Chief Minister Bhagwant Mann. In the meeting, many important decisions regarding the election announcements can be made.
Also read: Delhi civic polls: AAP moves SC for free, fair, timely elections

The Aam Aadmi Party has promised 300 units of electricity free to every household, the solution of unemployment and education facilities. The government also promised to give 1000 rupees every month to every woman who s above 18 years. All these promises will be discussed during the first cabinet meeting.