"We are not going to be scared and stop," said Bagga. 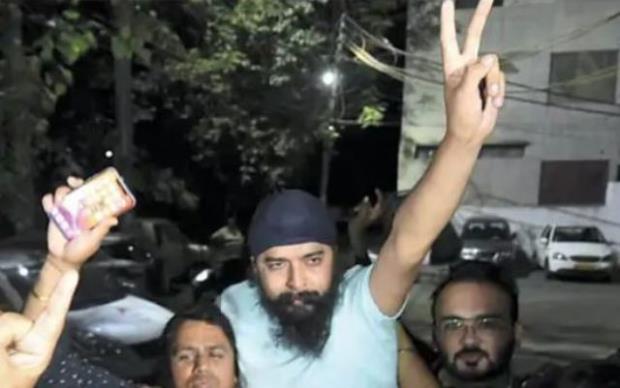 The saga surrounding Delhi BJP leader Tajinder Bagga continues. Bagga has challenged Arvind Kejriwal after returning home. Bagga claims that 100 FIRs should be filed against them, but they are unconcerned. They are completely prepared to defend themselves in court. Following Bagga's arrest, the Punjab Police has postponed the detention hearing in the Delhi and Haryana High Courts. The hearing has been rescheduled for Tuesday.
"Those who disrespect Sri Guru Granth Sahib shall be imprisoned in 24 hours, according to Arvind Kejriwal. I'm curious as to why this hasn't been done yet. My mistake is that I constantly question him. They believe that by filing a complaint, they would be able to prevent me from asking questions. Will abandon the demand for an apology for lying about the Kashmiri Pandit tragedy. We are not going to be scared and stop," said Bagga.
In this case, the Punjab government has filed two applications in the High Court. The first application requests that the CCTV footage relevant to the case be kept safe. With Bagga's arrest, the topic of CCTV footage from Peepli police station and the Kurukshetra Highway has been highlighted. The second application requests that BJP leader Tajinder Bagga and the Delhi Police join a political party. Advocate Satyapal Jain, on the other hand, appeared on behalf of the Delhi Police only yesterday. Initially, the Punjab government filed a complaint against the Haryana Police.
Also read: Tajinder Bagga: We will keep struggling till Arvind Kejriwal apologises
Tajinder Bagga has also filed a petition in the High Court seeking a hearing on his dismissal petition filed in the Mohali Cyber Crime Cell. It will also get a hearing on Tuesday. In this case, Bagga has yet to receive any interim relief.
During yesterday's hearing in the High Court, the Punjab government suffered a huge blow. The Punjab government's request to stop Bagga from being transported from Haryana to Delhi was denied by the High Court. The case will now be heard once more on Tuesday.