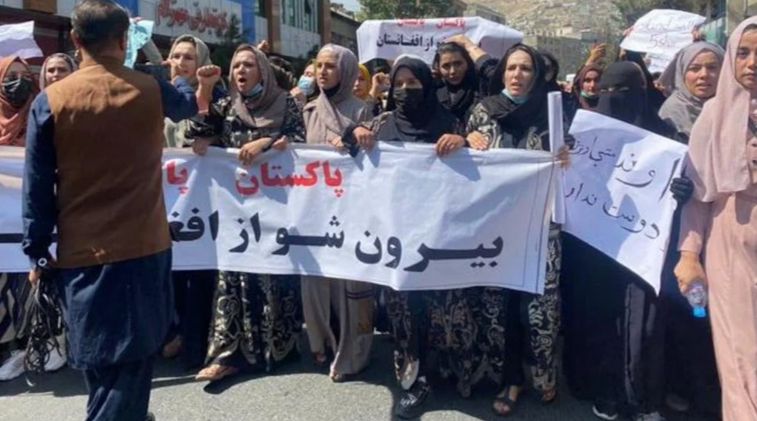 After being shut out from the Taliban‘s new government, women increased pressure on Afghanistan‘s new rulers with a number of protests Wednesday, at least one of which was broken up by Taliban fighters who whipped some of the demonstrators and arrested local journalists.

The protests came one day after the Taliban announced an interim Cabinet composed exclusively of the group’s stalwarts, with no women or former political figures and few minorities. Although the rallies were small, with only a few dozen women in each case, they put the new government to the test after it declared that participating in — and covering — protests is illegal without government permission.

The Taliban authorities took the two men to a police station and put them in separate cells before severely beating them with cables, according to Etilaat-e Roz.

They were both released on Wednesday and have been receiving medical treatment in hospital for injuries to their backs and faces.

Zaki Daryabi, editor-in-chief of Etilaat-e Roz, said: "Two of my colleagues from who were detained by Taliban, beaten for four hours."

He added: "Under constant and brutal torture of the Taliban, the reporters lost their consciousness four times.”

"This is unacceptable. We want the Taliban to bring their soldiers to justice. We also all the media organisations stand together against this unacceptable torture."

A video posted on social media showed a Taliban fighter whipping one of the demonstrators as several women screamed and hurried away.

Patricia Gossman, associate Asia director at Human Rights Watch, said: "Taliban authorities claimed that they would allow the media to function so long as they 'respected Islamic values', but they are increasingly preventing journalists from reporting on demonstrations.”

"The Taliban need to ensure that all journalists are able to carry out their work without abusive restrictions or fear of retribution."

Human Rights Watch also reported that the Taliban authorities also detained a photojournalist named Wahid Ahmadi from Tolonews on Tuesday and released him later that day.