EV users are in a tizzy after the Tata Nexon electric car caught fire in Mumbai. For the past few months, the news of electric scooters catching fire had similarly created distrust in the minds of people regarding EVs. 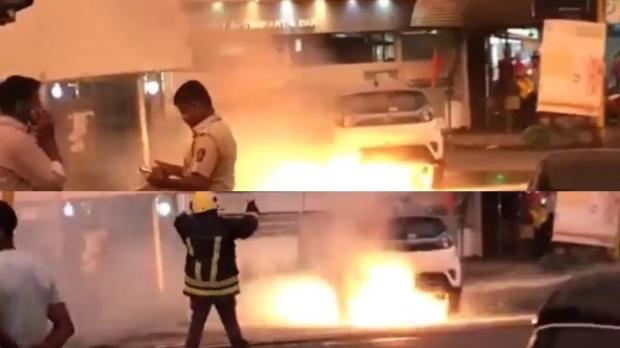 EV users are in a tizzy after the Tata Nexon electric car caught fire in Mumbai. For the past few months, the news of electric scooters catching fire had similarly created distrust in the minds of people regarding EVs. Now the incidents of fire in the car have forced people to be more alert.
However, the company has stated in its clarification. Fire hazards in EVs are limited to startups or inexperienced manufacturers only in a country like India. EV fire hazards also occur in the US. Most of these EV threats come from reputable EV manufacturers such as Tesla Motors and General Motors. A detailed investigation is currently being done regarding this incident.
After that, we will be able to say something about this. We are committed to the safety of our vehicles and their users. This is the first such incident after more than 30,000 electric vehicles have covered more than one million kilometres across the country in almost 4 years.
Mumbai Nexon EV is the best-selling electric car in India. Around 2,500 to 3,000 units of EVs are sold here every month. So far, there has been no incident of fire in the Nexon EV. But yesterday a Tata Nexon electric SUV caught fire in the Vasai area of ​​Mumbai.
Also Read: Fire at plastic factory in Bawana
Video of EV catching fire goes viral
A video of Tata Nexon catching fire is becoming increasingly viral on social media. According to media reports, the owner of the car had charged his Nexon EV with the usual slow charger installed in his office. After driving about 5 km at a slow speed towards his home, the driver started hearing a sound from the vehicle.
Apart from this, soon he started seeing warning signs on the instrument cluster, seeing the warning, the driver got out of the vehicle. Twitter user kamaljoshi108 posted a video from his handle, in which the Tata Nexon EV is seen burning. And trying to extinguish it.
Even though a burning electric car cannot be extinguished with water. EV fires take longer to extinguish, as individual cells are subject to a chain reaction and will continue to burn individually or in small groups.