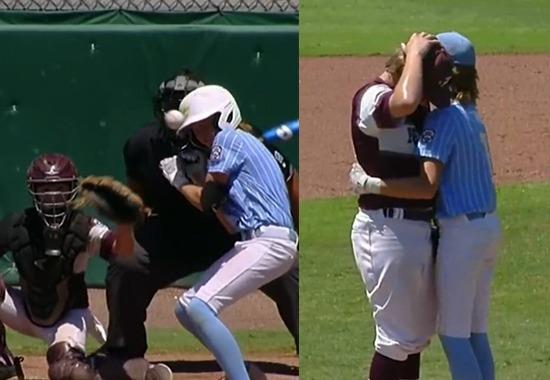 An act of 'true sportsmanship' was witnessed on Tuesday during the Little League Southwest Region championship. The Texas little leaguer video has been going viral on Twitter with netizens hailing the 'tough kid' for displaying a heart-winning gesture. In fact, Texas little leaguer viral video is spreading like a wildfire not only in the United States but also around the world.

Reportedly, the Texas vs Oklahoma Little leaguer viral video incident took place on Tuesday in the Little League Southwest Region championship. During the Texas vs Oklahoma game, a nasty incident took place which was caught on camera and later went in viral. In the Texas leaguer viral video, Texas East pitcher Kaiden Shelton had a pitch get away from him and strike Tulsa's Isaiah Jarvis in the head reported USA Today. At first, the nasty blow to the striker shocked all, however, luckily the ball struck Jarvis on his helmet.

Seeing the shocking incident, the pitcher went into heartbreaking and dejected mode. Seeing this, the striker who was nastily hit on his helmet went straight to the pitcher and hugged him in front of the crowd winning the crowd's applause. In the Texas Oklahoma viral video, Jarvis can also be heard saying "Hey, you're doing just great."

Oklahoma little leaguer gets hit in the head and then comforts the pitcher who is shaken up afterward pic.twitter.com/hYYLiy511K

Coming back to the game, Texas East ended up winning the game 9-4 and have now qualified for the Little League World Series, which will be played Aug. 17-28 in Williamsport, Penn., and feature a total of 20 teams, with 10 in the United States bracket and 10 in the international bracket.