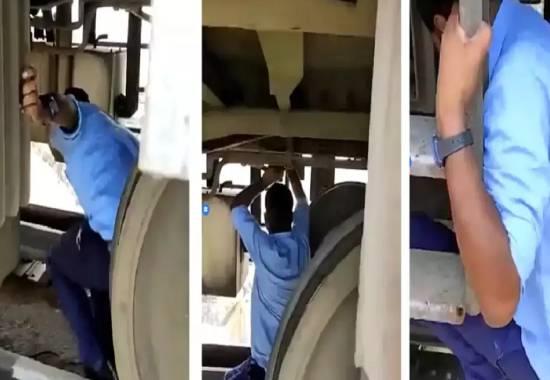 The incident happened with an express train from Kalyan to Gorakhpur. The loco pilot of a train from Kalyan to Gorakhpur risked his life to open the brakes of the train after a passenger pulled the emergency chain. The train was stopped at a railway bridge that had only a single track. The incident took place in Godan Express when an unknown passenger pulled the emergency chain.
The train stopped midway as it was crossing the bridge between Ambivali and Shahad over the Ulhas river. The loco pilot, A.R. Mishra, got off to undo the break from under the train. This was an especially challenging and dangerous task because the bridge was a single track one with no room for a person to even stand.
Loco Pilot's brave act gets mixed reaction
As soon as Ashwini Vaishnaw shared the video, many appreciated the Loco Pilot , however, there were people who highlighted that the problem could be solved by technology if India had it in their train.
Also Read: Woman ends life on railway track with 2 kids