The trailer of film Thank God starring Ajay Devgan, Sidharth Malhotra and Rakulpreet Singh is out. Fans can’t wait to see the movie 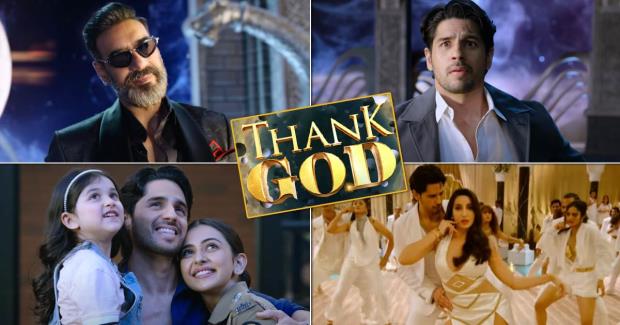 Ajay Devgan, Sidharth Malhotra and Rakulpreet Singh shared the first poster of their upcoming film ‘Thank God’ on their Instagram account on Thursday. Ever since the poster has come out, the fans can’t keep calm and have been waiting for the trailer to be out soon. To a matter of surprise, the maker of the film, Indra Kumar launched the trailer of the movie today.

As soon as the trailer had been out, it created a massive buzz on social media. The film seems to be a comedy ride where Sidharth Malhotra plays the role of a common man and Ajay Devgan has been established as Chitragupta in the film. The movie ‘Thank God’ seems to story of a man full of confusion and sins who reaches Yamlok where he plays the ‘Game Of Life’ with Ajay Devgan. The whole story revolves around anger, jealousy, lust, delusion and more.

Ever since the trailer has been out the social media is just full of praises for the whole cast as they can’t wait to see Sidharth and Ajay Devgan in a new avatar.

The movie is all set to release on the big screens on the 25th of October and then after a few months will surely have an OTT release as well. Sidharth Malhotra was last seen in Shershaah which bagged him huge praise for the role he played and is all set to return to theatres after a year. Ajay Devgan’s last movie was Runway 34 which till now is the talk of the town and Rakulpreet Singh’s Cuttputlli has become one of the major thriller movies released on OTT.