The Archies: There was a discussion for a long time about Shahrukh Khan's daughter Suhana Khan and Janhvi Kapoor's sister Khushi Kapoor that both these kid stars would soon enter Bollywood. 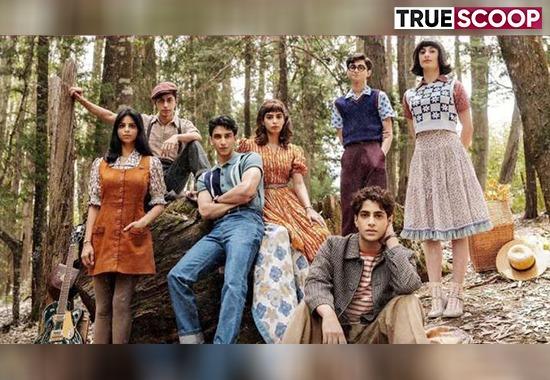 The Archies: There was a discussion for a long time about Shahrukh Khan's daughter Suhana Khan and Janhvi Kapoor's sister Khushi Kapoor that both these kid stars would soon enter Bollywood.
In such a situation, the wait of those fans who were waiting to see these two on screen is about to end, because Zoya Akhtar has made a film about Khushi Kapoor and Suhana Khan.
The Bollywood's Big B Amitabh Bachchan's grandson Agastya Nanda is also set to make his debut in this Netflix movie. The first poster of the The Archies has also been released. The film has been directed by Zoya Akhtar and the shooting has been started.
Teaser: The Archies
In the teaser, Suhana Khan and Khushi Kapoor are seen in their childhood avatar with the rest of their friends and are seen jumping and having fun. The 7 star kids have featured in the teaser of this film directed by Zoya Akhtar, including Suhana and Khushi. In this teaser, everyone is seen at the picnic spot, who are seen laughing a lot with each other, SRK's daughter Suhana Khan is seen posing for pictures and Khushi is seen enjoying and blowing bubbles in the joy of being with friends.
Teaser: The Archies
Apart from Shahrukh's daughter Suhana and Sridevi's daughter Khushi Kapoor, the teaser of Zoya's film also features Agastya Nanda, Mihir Ahuja, and Vedang Raina, and Yuvraj Menda.
Also Read: Modern Love Mumbai review: The love stories set in Mumbai, are they worth watching?
Watch the teaser of Suhana Khan and Khushi Kapoor's film here.
The film features Bollywood's star kids from Big B to Shahrukh Khan and more. Before the teaser surfaced, the first footage of young talents was also revealed from the studio.
We can see that Suhana Khan was seen as her film character Veronica Lodge. However, Agastya was seen as Archie Andrews, Khushi as Betty Cooper and Vedang as Jughead Jones. The director of this film Zoya Akhtar has been busy preparing for The Archies for the past several years.
This film The Archies has been produced by Reema Kagti.Several days ago a photo was released with the cast of this film in which the official announcement of the film was made and it was written in the caption that the shooting of The Archies has begun.