*The people of Gujarat have got such an opportunity for the first time when they can get rid of the BJP and the Congress: Raghav Chadha 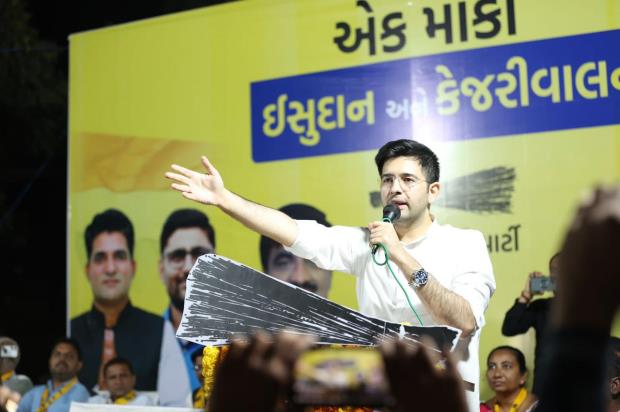 The Aam Aadmi Party, which is moving forward with its victory chariot in the Gujarat elections, has become the first choice of the people of Gujarat today. From national leaders to workers of Aam Aadmi Party, everyone is working day and night to bring change in Gujarat. Aam Aadmi Party's Rajya Sabha MP and Gujarat State Co-in-charge Shri Raghav Chadha has been holding big public meetings and rallies in different parts of Gujarat for the past several days. Today Shri Raghav Chadha took part in big public meetings in Kankrej and Patan of Banaskantha. Thousands of people participated in the public meetings organised by the Aam Aadmi Party. It is clearly visible from the unprecedented support of the people that change will be brought in Gujarat.

While addressing thousands of people present, Aam Aadmi Party's Rajya Sabha MP and Gujarat State Co-in-charge Shri Raghav Chadha said, "Today Gujarat is standing at an important juncture. Today, for the first time, the people of Gujarat have got such an opportunity when they can get rid of the BJP and Congress and form an honest, educated and hard working Aam Aadmi Party Government. The Congress party was in power in Delhi for 15 years. But the people of Delhi once made up their mind and uprooted the strong Congress party which had been ruling for 15 years from Delhi. And the people of Delhi formed the Aam Aadmi Party Government with the largest majority of independent India."

He continued, "Similarly, Punjab was ruled by only two parties for 50 years, the Congress and the Akali Dal. The people of Punjab also uprooted both these parties and formed the Aam Aadmi Party Government. Since Gujarat became a separate state, it has been ruled by the Congress party for 35 years and then by the BJP for 27 years. Under the rule of BJP and Congress, their sons, daughters and their family members became big people, they bought big cars, made big mansions and built big businesses. But these governments did not give anything to the common people, to the poor and to the farmers. The people of Gujarat have given 35 years to the Congress and 27 years to the BJP. So I have a request that the people of Gujarat should try the Aam Aadmi Party by giving us one chance only for 5 years."

He concluded, "The people of Gujarat have to decide whether they want a corrupt and inflationary government or want an honest Kejriwal government who gives you benefits of about ₹30,000 every month. Next month you will get a chance to make a choice. On December 8, we will not just make the fate of any party but will make the future of your children and your family brighter. I have come here spreading my arms and asking for a chance, I want you to give a chance to Shri Arvind Kejriwal. I want you to make our candidate win with a lot of votes. I am quite sure that the Aam Aadmi Party Government will be formed in Gujarat and a government with public participation will be formed."