The real-life Mona Darlings and their mafia sugar daddies

As is well-known, the mafia has always been hugely attracted to the glamour of Bollywood and many of its female personalities, especially the young, upcoming and coldly ambitious actresses. 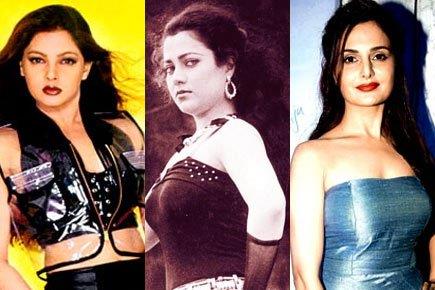 As is well-known, the mafia has always been hugely attracted to the glamour of Bollywood and many of its female personalities, especially the young, upcoming and coldly ambitious actresses. The film industry abounds with tales of how many underworld dons or their associates seemed to develop a 'crush' on wannabe or even established heroines, meeting them at parties, special screenings, foreign stage shows or even cricket matches.And somehow, whatever be the fate of these girls' films, they seemed to make a 'superhit' impression on the mafiosi and both sides used the dalliance for 'mutual benefits'.Old Bollywood films were synonymous with the likes of the baddy, Hamid Ali Khan, dreaded as the on-screen vicious don Ajit, a suave and suited-booted velvety smooth talker, who had a perpetual female hanger-on -- a smashing, sexy but a stupid, moronic 'Mona Darling' -- who became as popular as the villain himself.Though there are many rumours of such real-life 'Mona Darlings' in Bollywood who share cosy relations with the mafiosi, some like Mandakini, Mamta Kulkarni and Monica Bedi even grabbed top headlines for their dark liaisons.An attention-grabber actress was Monica Bedi, 47, who strayed far from her onscreen exploits to off-screen experiments with the mafia baddies like Abu Salem, tagged also as a terrorist and currently in jail for various offences.Despite a satisfactory beginning in the film world in 1994, Bedi was concerned about her career not really taking off in the sea of mega-heroines of that era dominating the film industry.This was where her reported 'friendship' with Salem helped her get some film assignments, but the good times didn't last too long.Subsequently, in 2002, she was nabbed along with Salem in Portugal, served a prison sentence for illegal entry to that country, was deported to India in November 2005 and was convicted in a fake passport case, before her release from jail in July 2007.Since then, she has largely kept a low profile, but continues her acting career with appearances in Bigg Boss-2, a couple of reality shows, crooning in a spiritual music album, a Punjabi film, and even a tele-serial, though the old spark is missing.Mamta Kulkarni, 59, was once considered a show-stopper who had a dream career in Tollywood in 1991 and then Bollywood (1992), acting with top stars like Aamir Khan, Shah Rukh Khan, Salman Khan, Govinda, Akshay Kumar, Saif Ali Khan, Raaj Kumar, Nana Patekar, Sunny Deol, and more.After a row over her role in "China Gate" (1998), with allegations of mafia allegedly threatening the film-makers, Mamta's sunset started and by 2002, she had packed up her bags and the final film.She re-surfaced suddenly in the limelight when her liaisons with an international drug baron Vicky Goswami emerged amid reports that she had married him in 2013.In June 2016, Mamta shot into global news after the Thane Police bust a massive Rs 2,000-crore narcotics racket and named her and Goswami as the prime accused, though she denied any involvement.Not convinced, the Thane Police in June 2017 declared the couple as a 'Proclaimed Offender', raided her Mumbai home and the US Drugs Enforcement Administration entered the probe with Goswami being extradited from Kenya to the USA that year.Though Mamta's whereabouts are not clear, she is reportedly living in a Gulf nation, fighting legal battles in India and Kenya.A discovery of the legendary Raj Kapoor, Mandakini, 50, became the heart-throb of millions as she cavorted under a waterfall in "Ram Teri Ganga Maili" (1985), giving wet-dreams to the viewers, and barely a decade later, lived upto the title of her maiden film.With a floundering career not moving much after a smooth take-off, in the early-1990s, pictures of her meeting the absconder don Dawood Ibrahim Kaskar in Dubai were splashed in the media back home.Shaken, she confessed to the meeting but furiously rebuffed all suggestions of having any serious relationship with the don, and after she bowed out of Bollywood with her final film "Zordaar" (1996), the wagging tongues finally rested in peace.Presently, Mandakini is said to be an exponent in Tibetan Yoga along with her husband Dr. K. T. Rinpoche-Thakur who runs a Tibetan medicine centre.Besides these, there are some other old and new starlets whose names have been linked with the underworld, but the wary Bollywood folk speak in hushed tones of such 'rumours'.
Source IANS