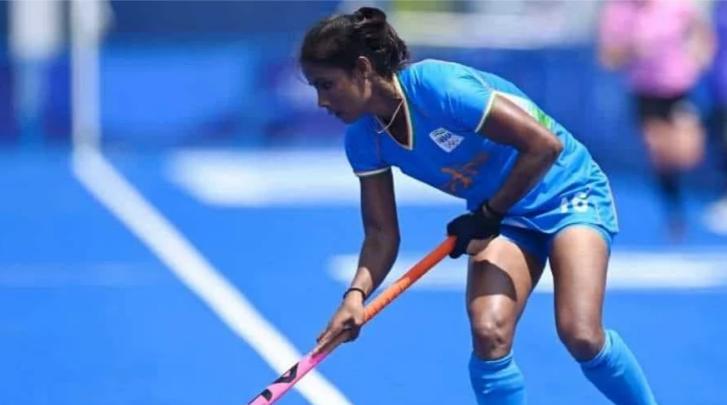 Vandana Katariya officially became the first female Indian hockey player to score a hat-trick in the Olympic Games as India beat South Africa 4-3 in a Women’s pool A hockey match at the Tokyo Olympics.

Vandana Kataria, a resident of Roshanabad, a small village in Haridwar, Uttarakhand, created history by scoring 3 goals in the match. She became the first female hockey player from India to score a hat-trick of goals in an Olympic match. Thanks to her goal, India's hopes of reaching the quarter-finals remain intact. 29-year-old Vandana first wanted to become a Kho-Kho player, but due to good running speed, she started playing hockey.

Vandana Katariya played a crucial role since the start of the match. She scored the first two goals in the first quarter itself. However, South Africa gave a good fight to the Indians as they equalised 3-3.

But, with few minutes left into the match, Vandana Katariya scored her third goal and a most important one for India, keeping them in contention.

The centre of attraction of India vs South Africa was undoubtedly Vandana Katariya. She has been an asset for Indian team for quite a long time. She had won the player of the tournament award in Asian Champion Trophy, 2018 wherein India won silver medal. She was also the part of 2016 Rio Olympics.

Vandana shared in an interview, "My family members did not want me to become a player as a girl and go out, but my father used to support me. He helped me completely, so people started taunting him too."

Vandana gives full credit for her selection in the national team to her Lucknow coaches Vishnu Prakash Sharma and Poonam Lata. Her favorite player is Luciana Aymar of Argentina. She was also nominated for the Arjuna Award in 2021.