Tovino Thomas took to Instagram to share a letter from Karan Johar appreciating Minnal Murali that he received via WhatsApp. 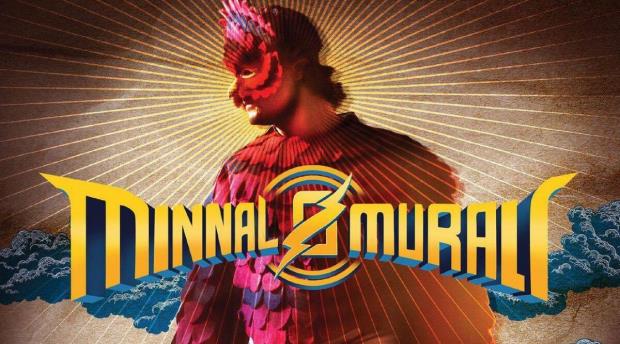 Minnal Murali, the first superhero film in the Malayalam film industry, starring Tovino Thomas and directed by Basil Joseph, has been progressively gaining acclaim since its premiere on Netflix last month. The film was hailed for depicting a sprawling tale set in Kerala. Tovino has now released a note from Bollywood director and producer Karan Johar expressing his gratitude.
Karan mentioned in his message that he had a great time watching Minnal Murali and praised the squad. He also commended Tovino's performance and termed Minnal Murali a "clutter buster" in the superhero genre.
Tovino Thomas, an actor, released a screenshot of Karan Johar's Whatsapp message, which stated, “Hey Tovino! I finally got the opportunity to watch Minnal Murali last night and had so much fun! So smartly made and keeping the entertainment quotient right through! Was a clutter breaker superhero film! And of course, you were incredible! Congratulations! Such a joy!” The note was closed off with a love heart emoji by Karan Johar. 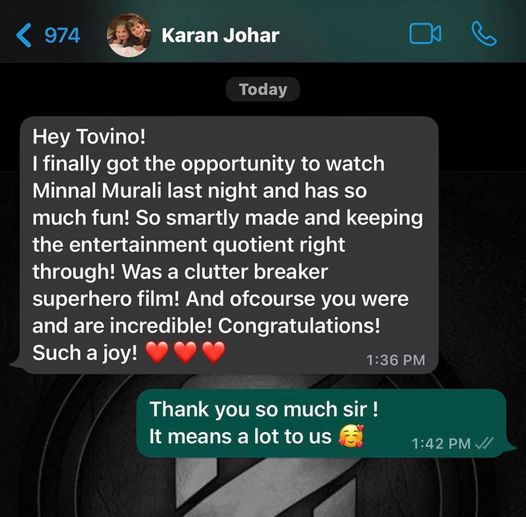 Tovino Thomas sent a statement on his Instagram account, sharing a screenshot of Karan Johar's appreciation post. The statement read , “Messages like these! It’s not always that the whole world starts appreciating your work from every nook and corner. And especially when an ace filmmaker like @karanjohar who has given numerous all-time entertainers for us, appreciates our work, it sure feels surreal. Thank you Sir for letting us know how much you loved the movie! Glad to know you enjoyed it thoroughly.” Tovino Thomas' followers and celebrities praised Tovino's efforts in portraying the superhero persona 'Minnal Murali' in the comments section of the post.
Also Read: Arjun Yadav thrilled on his digital debut 'Woh Ek Raat'
According to Basil's statistics, the film has been a worldwide success. In its first week, Minnal Murali, which was published on December 24, made it onto Netflix's top ten list in 11 countries. Since its release, the film has made inroads into the Latin American and African markets, and has landed in the top ten lists in 30 countries. Minnal Murali has also amassed a total of 1.14 crore hours of Netflix viewing.