“One who is silent after seeing ‘inhuman massacre’ is dead,” tweets Rahul Gandhi after violence in UP's Lakhimpur-Kheri

“We will not let this sacrifice go in vain - Kisan Satyagraha Zindabad!,” wrote Rahul Gandhi. 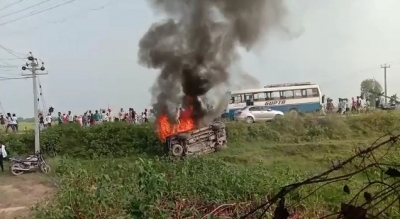 On Sunday, Several persons were injured and three vehicles were set on fire when protests on farm laws took a violent turn and unidentified persons opened fire at the farmers.

On this, Rahul Gandhi tweeted that the sacrifice of the farmers would not go in vain. He wrote, in Hindi, “The one who is silent even after seeing this inhuman massacre, he is already dead. But we will not let this sacrifice go in vain - Kisan Satyagraha Zindabad! #FarmersProtest”.

Also Read: Violence in UP's Lakhimpur-Kheri after farmers run over by vehicle

“It is understandable how much hatred there is among the BJP workers against the farmers. It is highly condemnable that the farmers who were peacefully opposing the Deputy Chief Minister Keshav Prasad Maurya who reached Lakhimpur were trampled by the son of Minister of State for Home Ajay Mishra. Strictest action should be taken against the culprits,” a tweet from the official Indian National Congress read.