Maintaining its record of neutrality, India has abstained on a UN General Assembly resolution condemning Russia's annexation of Ukrainian territories, declaring that it is consistent with New Delhi's "well thought out national position", and has called for a diplomatic solution. Author : Rakesh Behal 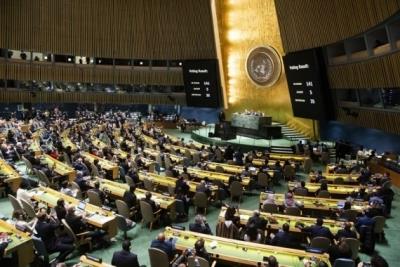 Maintaining its record of neutrality, India has abstained on a UN General Assembly resolution condemning Russia's annexation of Ukrainian territories, declaring that it is consistent with New Delhi's "well thought out national position", and has called for a diplomatic solution.

The resolution, which received 143 votes, with only five countries voting against it, and 35 abstaining on Wednesday at the Assembly's emergency session, passed with the required two-thirds majority showing Russia's isolation.

The Assembly action followed Moscow's veto of a similar resolution on October 1 in the Security Council.

Explaining India's decision, Permanent Representative Ruchira Kamboj said that with its "firm resolve to strive for a peaceful solution through dialogue and diplomacy, India has decided to abstain".

At the same time, she directed criticism at Russia without naming it: "We have consistently advocated that no solution can ever be arrived at the cost of human lives. Escalation of hostilities and violence is in no one's interest."

Prime Minister Narendra Modi "has said unequivocally that this cannot be an era of war", she said citing his remark in the presence of Russia's President Vladimir Putin.

She also quoted from External Affairs Minister S. Jaishankar's speech at the Assembly in September in which he implied support for Ukraine in the conflict, saying, "We are on the side that respects the UN Charter and its founding principles".

In the run-up to today's vote at the Assembly, India had voted with the West and in opposition to Russia on three procedural motions that did not affect its neutrality in a substantive way.

India had also abstained on the recent resolution in the Security Council and on the two resolutions in the General Assembly condemning Russia in March.

During the call, according to the External Affairs Ministry, the Prime Minister had told Zelensky that there could not a be military solution and dialogue was the way to end the conflict. He also offered India's readiness to work on peace efforts.

Further, he emphasised the importance of respecting the territorial integrity and sovereignty of nations, the ministry said.

Before the vote at the Assembly, Russia's Permanent Representative Vasily Nebenza repeated Moscow's assertions that the four regions of Ukraine had voted in the 90 per cent range in referendums to join Russia.

Ukraine and several countries have called the referendums an illegal sham because they were held under military occupation.

Nebenza accused the Western countries of threatening nations with economic consequences if they did not vote with them and had demanded a secret ballot, which was rejected by the Assembly.

Moscow retained its support of four that it had in the two Assembly resolutions in March, although Eritrea abstained this time, while Nicaragua switched position to back Russia.

China abstained on the vote.

Although the West unleashed a high-pressure diplomatic campaign, it managed to get only two more votes than for the first resolution in March and three more than for the second one.

Speaking before the vote, US Permanent Representative Linda Thomas-Greenfield appeared to take a hard line against diplomacy and dialogue that she saw as placatory.

"The only way to bring peace is to stop this aggression, to demand accountability, to stand together with conviction, to show what we will not tolerate", she added.

The Assembly session also witnessed a sideshow by Pakistan, which stuck to its gimmick of bringing up Kashmir regardless of the topic on the agenda.

Kamboj dismissed it as an attempt to misuse the UN forum with "frivolous and pointless remarks".

Islamabad's Permanent Representative Munir Akram, who abstained on the resolution, said that he looked forward to a "similar concern or condemnation" of what he called India's attempts to formalise the "illegal annexation" of Kashmir.

India has said that the people of Kashmir have exercised their right to self-determination by voting in several elections and electing governments.

Kamboj called on Pakistan to stop cross-border terrorism while declaring, "The entire territory of Jammu and Kashmir is and will always be an integral and inalienable part of India irrespective of what the representative of Pakistan believes - or covets."

While explaining India's abstention, she said, "The path to peace requires us to keep all channels of diplomacy open. We, therefore, sincerely hope for an early resumption of peace talks to bring about an immediate ceasefire and resolution of the conflicta."

"India stands ready to support all such efforts aimed at de-escalation," she said.

The global South has suffered collateral damage from the conflict's effects on fuel, food and fertiliser, Kamboj said.

"We must therefore not initiate measures that further complicate a struggling global economy," she said.

Speaking to reporters after the session, Ukraine's Permanent Representative Sergiy Kyslytsya called the vote "historic" and said that it was "very bad" for Russia that only four countries joined it.

Bangladesh, Bhutan, Maldives and Nepal voted for the resolution, while Sri Lanka abstained.

Afghanistan and Myanmar, which continue to be represented by the elected governments that have been overthrown, voted for the resolution.