US reiterates support for India getting UNSC permanent seat

President Joe Biden on Wednesday reiterated the US' commitment to India getting a permanent seat on the Security Council to ensure it remains credible. 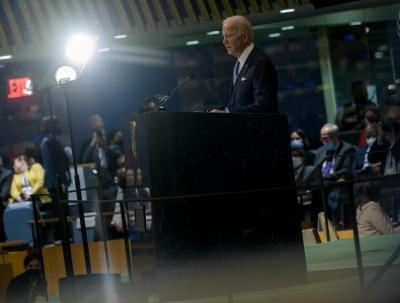 President Joe Biden on Wednesday reiterated the US' commitment to India getting a permanent seat on the Security Council to ensure it remains credible.

Addressing the high-level meeting of the General Assembly, he said: "The United States supports increasing the number of both permanent and non-permanent representatives on the Council. This includes permanent seats for those nations we have long supported."

"The United States is committed to this vital work," he declared.

Washington has long expressed backing for India's quest for a permanent seat through different administrations.

It also backs permanent seats for Japan and Germany.

"I also believe the time has come for this institution to become more inclusive, so they can better respond to the needs of today's world," Biden said.

He said that the US backs "permanent seats for countries in Africa, Latin America and the Caribbean.

In order "to ensure the council remains credible and effective", he said, the US also supports increasing the number of both permanent and non-permanent representatives of the Council".

No clear front-runners have emerged from Africa, Latin America and the Caribbean for permanent seats, although Brazil, the largest country in South America, has staked its claim.

Of regional priorities, Biden spoke of the role of the Quad, made up of India, the US, Japan and Australia.

"In every region, we pursued new constructive ways to work with partners to advance shared interests", he said and mentioned "elevating the Quad and Indo-Pacific."

(Arul Louis can be contacted at aru.l@ians.in and followed at @arulouis)