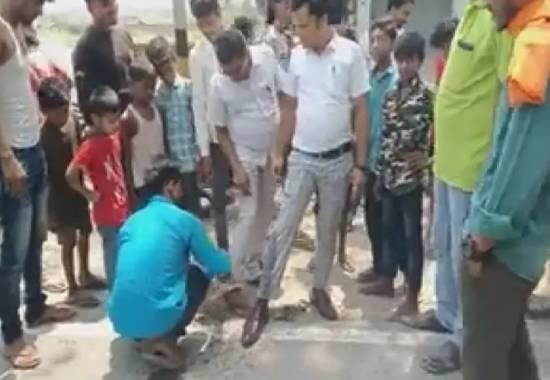 In Bihar's Vaishali district, spitting gutka (tobacco) for a truck driver turned out to be backfiring as he got an instant punishment on the road. Bihar Vaishali gutka incident took place on Saturday when a truck driver spit tobacco and it went straight to a teacher's body. Spitting Gutka on road is quite normal in India. Despite various sanctions and fines, spitting in public places has not been stopped. Places like UP, and Bihar are often criticized for such incidents.
However, the Vaishali Gutka viral video might work as an instance for people to stop spitting in public. Those who are eager to know about the Vaishali Gutka viral incident can read further:
The incident took place in Vaishali the truck driver accidentally spit on a teacher named Sajit Jha. Irked from this, Sajit Jh punished the truck driver on the spot for eating and spitting after gutka and too in front of the police. The teacher got the truck driver cleaned the shoes and pants of himself. Along with this, the driver was also taught the lesson of cleanliness and humanity by the teacher. Due to this high voltage drama happening publicly on the road, many people gathered there. During this, the police present there appeared in the role of a spectator.
Also Read: Bihar only have labourers, not companies, claims JD-U MP