Vicky Kaushal escaped: a FIR was filed for duplicating the bike's number, and an inquiry discovered that the bolt on the plate had created misunderstanding

A bolt fastened on the number plate used by actor Vicky Kaushal in a movie scene caused a misunderstanding, according to the police. 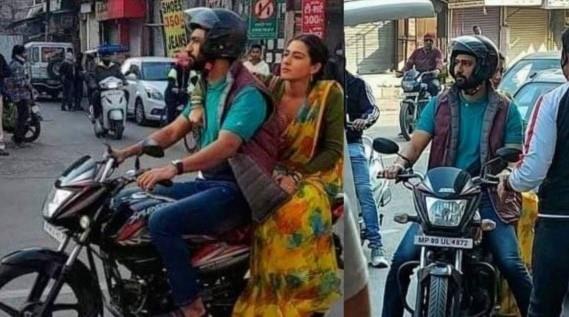 Indore: A resident of Indore, Madhya Pradesh, has filed a complaint against actor Vicky Kaushal, alleging that he used his two-registration wheeler's number unlawfully during the filming of a scene in the state.
The police, on the other hand, stated that there was a misunderstanding because of a bolt on Mr Kaushal's number plate during the movie scenario, and that the two-wheeler does not belong to the complainant but to the movie's production business.
Mr Kaushal was spotted riding a bike on the streets of Indore for his next unnamed film with co-star Sara Ali Khan, prompting the filing of the complaint.
Jai Singh Yadav, an Indore resident, alleged that the car number belonged to him and that it had been used without his permission by the actor. Mr Yadav urged that the situation be investigated by the police.
"Vehicle number used in the movie sequence is mine; don't know if the film unit is aware of it. This is illegal. He cannot use my number plate without permission. I have filed a complaint with the police. Action should be taken in the matter," Mr Yadav stated.
Meanwhile, Harsh Dave, a member of the film's production team, explained, "The bike which Kaushal has used in the film's shooting is numbered 1872. The bolt used to install this number plate was tightened at 1, and gave an impression of number 4. Due to the bolt, the number appeared to be 4872, the number claimed by Yadav to be his."
Also Read : In the Spotlight of Aryan Khan's case Sameer Wankhede Repatriated from NCB
"This confusion is due to the bolt fixed on the number plate, the bike used in the film is... the vehicle number of our production team member," Mr Dave stated.
"This was the reason why the number plate used by us resembled Jai Singh Yadav's Activa number," he further said.
Mr Yadav's accusation was investigated by Rajendra Soni, a Sub Inspector of Banganga, who arrived on the set of the film to examine Mr Yadav's complaint and said , "During the investigation of the number plate, we found out that all misunderstanding was caused by the bolt fixed on the number plate. Due to that bolt, the number one is looking like number four. The number used in the movie sequence belongs to the movie production. Hence nothing illegal had been found out in our investigation".