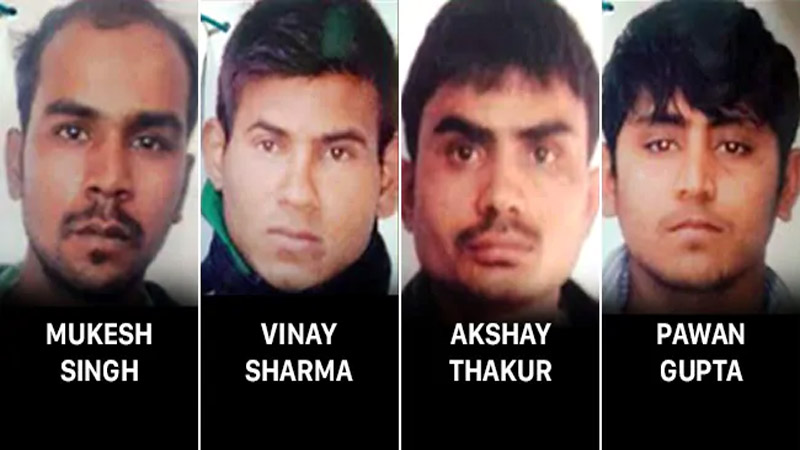 Vinay had filed mercy petition for the commutation of his capital punishment to a life sentence. However, his plea got rejected by the President Ram Nath Kovind on February 1. Vinay Sharma has also sought commutation of death sentence to life imprisonment through his advocate, AP Singh.

It is to be noted here, in months of the incident the fast-track court convicted the five, hence, the appeals lodged in high court and Supreme Court have been dragging the executions.

Supreme Court, earlier in the day, has sought response from the four death row convicts in the Nirbhaya gang-rape and murder case on the Centre's appeal challenging the Delhi High Court verdict which dismissed its plea against stay on their execution.

It also granted liberty to the authorities to approach the trial court for issuance of a fresh date for the convicts execution.

The 3-judges bench, headed by Justice R Banumathi also comprised justices Ashok Bhushan and AS Bopanna, said the pendency of the appeal lodged by the Centre and Delhi government before it would not be an impediment for the trial court in issuing fresh date for execution of the convicts.

Solicitor General Tuhar Mehta, appearing for the Centre and the Delhi government, said the execution of the convicts is not for "enjoyment " and the authorities are only executing the mandate of the law.

While referring to the delaying tactics of the convicts, he said three of them have exhausted their remedies but one of them, Pawan Gupta, has not yet filed either curative plea in the apex court or mercy petition before the President.

He said the court has to keep in mind the impact of this on the society as despite the fact that appeals of the convict were dismissed by the top court in 2017, the authorities were "struggling to execute them even now."

Mehta referred to the alleged encounter killing of four accused in the gang rape and murder case of a woman veterinarian in Hyderabad and said "people had celebrated after this and this was because people have started losing faith in the system. This reflects poorly on our system."

The court had initially said that issuing notice to the convicts would further delay the matter but did it later on the appeal filed by the Centre and Delhi government.