Some people standing nearby try to free the boy's finger from the robot. His finger was fractured and bruised after the incident. 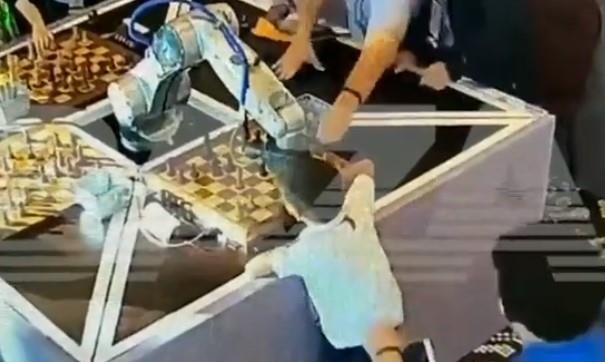 Recently, an incident happened in Russia, where during a tournament, a robot got so angry that it attacked a 7-year-old child. On July 19, during a tournament in Moscow, a robot playing chess broke the finger of a seven-year-old boy named Christopher.
The vice president of the Russian Chess Association, while giving information, said that it was the robot's turn to make a move but, the child was trying to move ahead of his schedule due to which the robot broke the child's finger. He added that this has happened for the first time. Speaking about the condition of the child, he said that there is nothing to worry about.
A video of this incident is now going viral on social media in which it can be seen that Christopher is making his move before the move of robot. After some time his finger got stuck in the robot's hand. Some people standing nearby try to free the boy's finger from the robot. His finger was fractured and bruised after the incident.
Also read: Viral Video: Nagpur traffic police's action against wrong parking, owner lifted in the air along with scooty
Christopher is one of the 30 strongest under-nine chess players in Moscow. According to the sources, the child's parents have decided to contact the Moscow prosecutor's office, but officials have said that the chess federation will sort it out and try to help in any way possible.