The Delhi daughter tied viral video shows, an 8-year-old's hands and legs tied and left on the roof of the house under a beating sun for not completing her homework 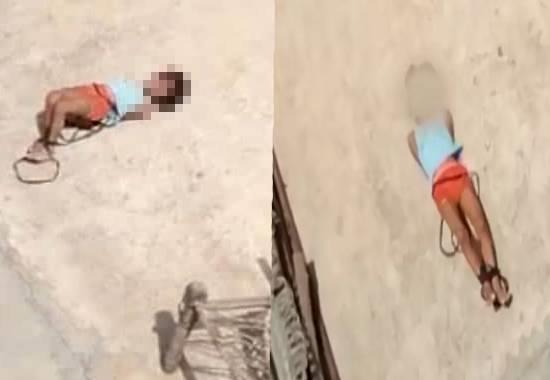 In a blood-boiling incident, a mother went too far to punish her child for not doing homework. The Delhi daughter tied on roof viral video has been doing rounds on social media with netizens demanding strict action against the mother who left her daughter tied up in scorching heat. As per reports, the incident took place in Delhi where a woman tied up her 8-year-old daughter and left her crying on the roof for not doing her homework.
The Delhi daughter tied viral video shows, an 8-year-old's hands and legs tied and left on the roof of the house under a beating sun for not completing her homework. The video shows the girl crying loudly and trying to escape from the tied ropes under the deadly heat of the National Capital of India. After the video went viral, the Delhi Police came into action and started legal proceedings against the mother.
Delhi mother ties daughter viral video
Also Read: Delhi Police SI arrested by CBI in bribery case

Reportedly, the Delhi Police first received the information that the viral video was from Karawal Nagar locality, however, nothing was found about the incident in the area. Later on, it was reported that the Delhi mother-tied-up daughter's viral video was from Khajuri Khas area, Tukmirpur and therefore the house was tracked down.
Delhi Police took to its Twitter handle and informed that appropriate action will be taken. "After a video of a girl child tied up on the roof of a house surfaced on social media, all possible efforts were made by Delhi Police to ascertain her identity and circumstances.  The family of the child has been identified and appropriate action initiated," wrote Delhi Police.