Viral video: Who is Vasudev, Know why his connection with Qatar Airways' CEO is trending in India

Vasudev - Qatar Airways CEO: The matter of controversial remarks against Prophet Mohammad is not taking its name to stop. Meanwhile, the demand to boycott Qatar Airways in India arose on social media. Author : Rohit Gupta 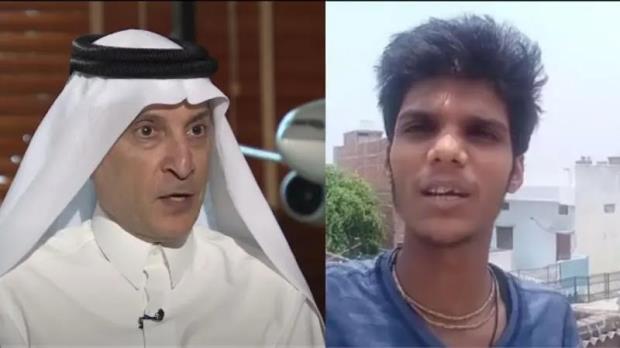 Vasudev - Qatar Airways CEO: The matter of controversial remarks against Prophet Mohammad is not taking its name to stop. Meanwhile, the demand to boycott Qatar Airways in India arose on social media. Not only this, in response to this boycott, a user shared such an interview which became increasingly viral in India. Some people are calling it funny and some are furious over it.
In fact, after the controversial remark, Qatar also expressed displeasure over it, an Indian user named Vasudev posted a video on Twitter and used a hashtag in it demanding a boycott of Qatar Airways. But here the mistake was made by the user that he wrote boycott while spelling boycott wrong.
After this, the reply of a user named Ahad went viral on this. A user named Ahad resorted to an interview with the CEO of Qatar Airways and edited it, meaning the user put his voice in the background.
It can be heard that the CEO says, 'I cancelled all my meetings and went straight to Qatar. I did this because Vasudev, the largest shareholder of my airlines, announced a boycott of Qatar Airways from his rooftop headquarters. Because of his boycott, now we do not understand how we will do our business, because it is a new type and a different label boycott which is spelt boycott.
Apart from this, the user has spoken many jokes. As soon as he posted this video, it went viral. People also started reacting to this. However, even on this, social media appeared to be divided into two parts. Some people started demanding a boycott of Qatar Airways on Twitter, while some called it impossible.
For now, watch the viral video here.