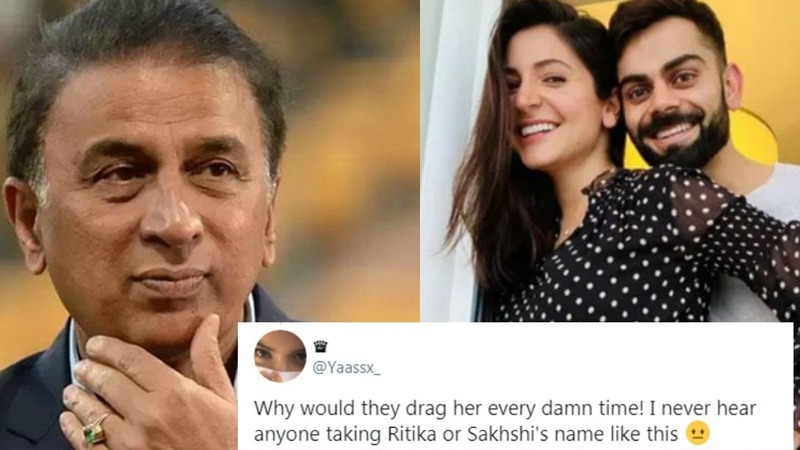 Virat Kohli, the skipper of Royal Challengers Bangalore had an off-day at the field as his team suffered their first brutal defeat of IPL of 97-run defeat. His performance in the match brought a lot of criticism to him as not just he failed to perform with the bat but also dropped two catches of KXIP skipper KL Rahul, which eventually cost them the match.

After being dropped by Virat Kohli, Rahul smashed 42 runs from just 9 balls. Later, in the 19th over, KL Rahul hit Dale Steyn for 26 runs before ending his innings by 132 runs. Later, during the run-chase, Virat Kohli failed to perform as he was sent back by Sheldon Cottrell after scoring only 1 run.

Soon after Virat Kohli failed to perform with the bat and walked back to the pavilion after scoring only 1 run, former Indian cricketer turned commentator Sunil Gavaskar came up with a surprising comment for the Indian skipper. Dragging Virat’s wife while criticizing his performance, one can say that Gavaskar’s statements were highly personal and also were uncalled for. He had said:

Well, there’s no denying the fact that Gavaskar didn’t really mean to disrespect the RCB skipper and his wife. However, he is getting brutally slammed on social media for dragging a player’s wife while criticizing him was definitely not the right choice for Sunil Gavaskar.

Soon, social media was flooded with the reactions from angry netizens on this, who just can’t stop trolling Sunil Gavaskar over his statement. While, there are many who are criticizing his statements, on the other hand, many fans are asking BCCI to remove Mr. Gavaskar from the commentary panel. Fans also started #BoycottGavaskar  and #SackGavaskar on Twitter.

Here, check out the reactions from Twitterati on this:

Get the latest update about IPL, check out more about Virat Kohli, KL Rahul, Match & IPL13