After seeing this there is no clue from where this Army man came from but somehow he saved the child's life although, he couldn't catch the car as it moved too fast from there. 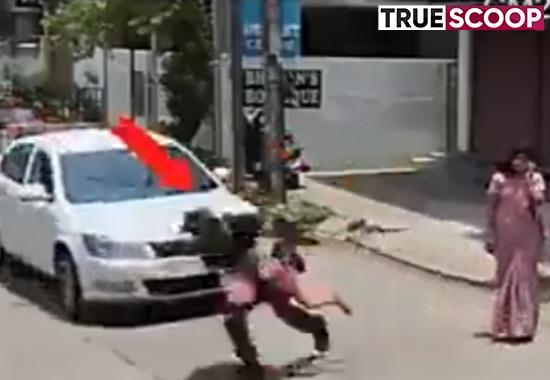 A video on social media is getting viral nowadays. In this video, it can be seen that a mother was seen busy on her phone while a little girl was seen crossing the road and suddenly a car came into her way but somehow she was saved by an Army Personnel who came there suddenly from nowhere to rescue the girl. After seeing this there is no clue from where this Army man came from but somehow he saved the child's life although, he couldn't catch the car as it moved too fast from there.
However, after saving the girl's life the army personnel gave some counselling to the woman that while she was busy on her phone as her daughter was about to die while explaining all this he suddenly snatched the phone from the woman's hand and shattered it into pieces on road.
Also Read: Ram Gopal Varma makes controversial tweet on Draupadi Murmu, asks 'who are the PANDAVAS'? Case filed
While seeing all this incident now Twitteratis are reacting in multiple ways as some of them are claiming that is video is fully Scripted as the video was recorded at 9:15 AM on 13 June but it seems like the video is made look-like at the noon as the sun is blazing too much which can be seen on the CCTV footage.
This video was shared by Atul Krishan a verified Twitter account handle however the location is not revealed in the video but he wrote "Salute to my army Personnel" and as of now more than 10 Lakhs views ( 1 Million) people have watched this video from Twitter. And it was shared 56, 000 times and has more than 1500 comments on the same.
Nevertheless, the reaction to the video is suggesting that it is Scripted but with a good moral story to show people not to use it while walking on the road with their belongings or while crossing the road. Meanwhile, some users also bane the video as they believed that just for some views they put the life of an innocent kid on the line which they didn't like it all.