SpiceJet flight SG-2962 coming from Delhi to Jabalpur, flying at an altitude of 5000 feet, suddenly encountered a technical fault on Saturday and had to make an emergency landing in Delhi. 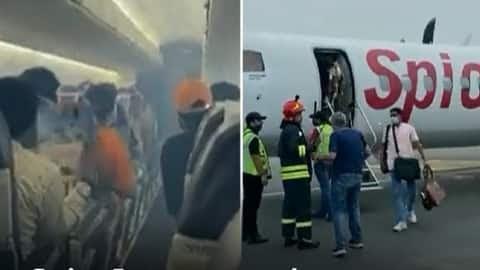 SpiceJet flight SG-2962 coming from Delhi to Jabalpur, flying at an altitude of 5000 feet, suddenly encountered a technical fault on Saturday and had to make an emergency landing in Delhi. A video released from the flight shows that smoke filled the cabin and passengers got scared. A traveller from Jabalpur has narrated the ordeal of this dreadful scene to the news agency.
Senior advocate of Madhya Pradesh High Court Pankaj Dubey was also travelling on the same flight. He told that as soon as the smoke appeared, all the passengers got scared. Fear was easily visible on their faces. The question in everyone's mind was what will happen next?
Pankaj, a passenger, told that all the children aboard the plane were crying. People did not understand whether to handle children, handle luggage or save themselves. The cabin crew immediately started advising the passengers to apply oxygen masks. Meanwhile, the AC of the plane was turned off and suffocation was being felt. People were just looking at each other's faces in disgrace.
Also Read: SpiceJet aircraft aborts take off at Patna airport
Nobody was understanding anything. He told that for about half an hour, the lives of the passengers came into trouble at an altitude of 5000 feet. Somehow people started silencing their children and after constant persuasion by the cabin crew, the situation gradually started to settle down.
He told that after this the flight safely landed in Delhi due to the understanding of the pilot. Alternative arrangements were made to send the passengers to their destination. Meanwhile, shortly after the incident, SpiceJet management has also informed about the technical problem in the aircraft from its official account.
The company has said in its statement that all the passengers have landed safely and they will also be sent to the destination. Investigations are on to find out what technical fault occurred in the flight. Meanwhile, another video also surfaced.
This is the second incident in two weeks when a SpiceJet aircraft has caught fire. According to media reports, on June 19, a similar incident happened on a flight from Patna to Delhi. The engine of SpiceJet flying from Patna to Delhi caught fire. The plane made a safe landing in a hurry. The DGCA said that the engine caught fire due to the collision of the bird. A safe landing was made in a hurry when smoke rose from the aircraft's engine.
Watch Video: https://youtu.be/il3kX052DWc