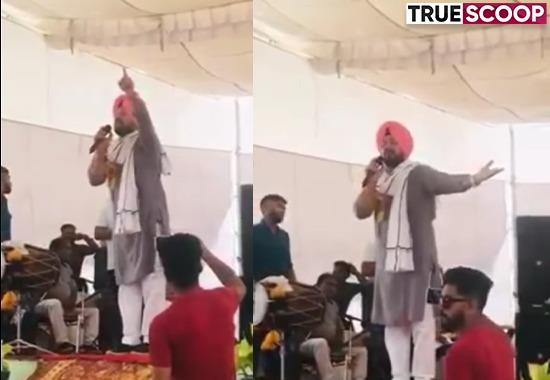 A viral video is spreading very quickly on Social media platform on Facebook today where AAP Punjab MLA Gurdev Singh Dev Mann from Nabha, Punjab can be seen singing famous Punjabi singer Babbu Mann's song 'Nazar na lag jaaye Toba meri Sarkar nu'.
After watching the video, Punjab National Congress has shared it on their official Facebook page and asked the AAP Punjab govt 'this is how the change will come, the real constitutional change is here', digs Congress.
However, the video is 1 minute 36 sec long in which we can see that AAP MLA is singing the full song and he was joined by an orchestra in the background, locals are seen enjoying this moment. As the users also wrote some interesting comments, One user wrote, 'How such MLA can be elected? When their state is suffering and they are enjoying wedding function and more?" Another wrote, "Catch the murderer of Sidhu Moosewala, and then sing the happy song, first do your duty, useless government".
Also Read: CM busts another scandal going on in Punjab
Click on the link to watch video: