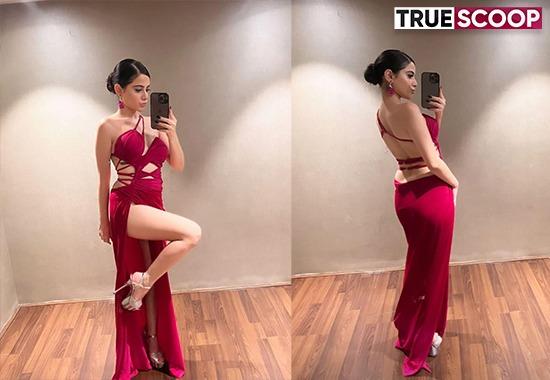 Urfi Javed New Look: Whenever Urfi Javed comes in front of the camera, with her comes some new drama. Something similar happened this time too. The actress was spotted wearing such a bold and revealing dress of maroon colour that her dress itself became her life. The actress was seen saving her flying dress due to the strong wind.
She was seen wearing a very revealing gown outside a restaurant in Mumbai. The actress had wrapped the clothes in the name of the gown in such a way that most of her body was being shown. This dress of the actress was not only revealed from the front but the gown was also backless.
The special thing is that this gown of Urfi has a thai slit. Due to this there was so much cut in the gown of the actress that she was seen handling her dress in some way due to the strong wind. One user said, "The dressing sense of the clothes is lousy but treats the fans well, at the time of taking the photo".

One user said, "Coffee with Urfi". One wrote, "She is so cute". One said, "No dressing sense but very humbling".
Also Read: How did Urfi Javed’s pics got uploaded on a porn site?
Before this, another video of Urfi Javed was very much discussed. In this, her clothes were made like a rope and it was wrapped around the body. This is not the first time that Javed has been seen wearing such clothes.
Even before this, she has surprised people by dressing like this many times and has been a victim of trolling many times. Even after this, she continues to share videos of experiments with her dress on social media.