What is Lateral Entry Reform? How it is challenging for administrative officers; Know process 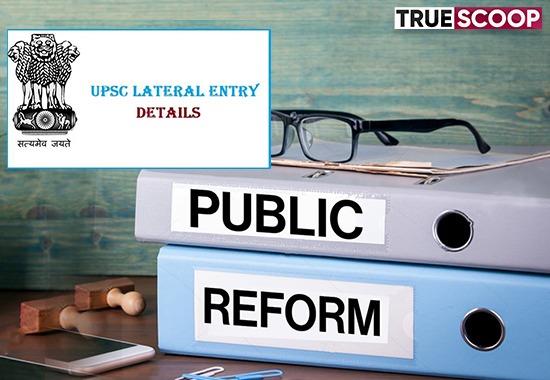 Lateral Recruitment Reform: Administrative officers are selected through the three-stage Civil Services Examination of the Union Public Service Commission (UPSC). But due to Lateral Entry, this exam is in the discussion.
In fact, in 2018, the central government decided to conduct lateral recruitment of joint secretaries to bring professionals into the civil services and to overcome the problem of shortage of IAS officers at the Centre.
Where how many posts?
Eight Joint Secretaries joined from the Lateral Entry. Of these, 7 are working at present. There is currently no information about the five joint secretaries, two from the general category, one from the OBC category and the other two. The proposal for lateral entry at Director/DS level is under consideration for the future.
How successful was the lateral recruitment scheme?
After three years, we tried to find out how successful the government's lateral recruitment scheme has been. Also how many professionals were included in the civil services through this scheme? What was his/her expertise and how much salary is he/she getting?
Also Read: IAS Pooja Singhal Case Updates: What is the secret of 'Diary', Her CA's connection; 'Alert' for Jharkhand Govt
How many of the lateral recruits are from other backward classes, scheduled castes and scheduled tribes or minority communities? Has there been any assessment of his work in the government? We also tried to find out whether there is any other proposal to bring subject experts (professionals) for the posts of Deputy Secretary and Director level through lateral entry?
To get answers to these questions, previously, News agency filed a Right to Information (RTI) with the Department of Personnel and Training (DoPT), which is the nodal department for personnel induction.
DoPT's reply to the RTI query
How many experts came into the system? Responding to this question, the DoPT said, “No data is available for this. The government has decided to make lateral recruitment to ten posts of Joint Secretaries during the year 2018-19.
In September 2019, eight Joint Secretaries were appointed in the concerned Ministries/Departments. Of these, seven are presently in condition.

Overall, DoPT did not directly respond to the other queries raised by us and referred them to several other departments/ministries. However, other departments/ministries have been asked to directly respond to us (Aaj Tak). But DoPT answered our query regarding future proposals. In which it said that "a proposal has been sent to UPSC for lateral recruitment at Director/DS levels".
It seems that while the government tried to bring in 10 joint secretaries through lateral recruitment to address the shortage of IAS officers, it managed to recruit only 8 as of September 2019 and only seven of them are still working. Huh.
What is Lateral Recruitment?
We understood in easy language, that without passing the UPSC exam through lateral entry, one can get an appointment to a high post in bureaucracy. Some time ago UPSC had issued a notification for the recruitment of posts by lateral entry, due to which the opposition parties became attackers against the central government. The opposition is telling this as a trick of the government to get its people admitted through the back door of the bureaucracy.