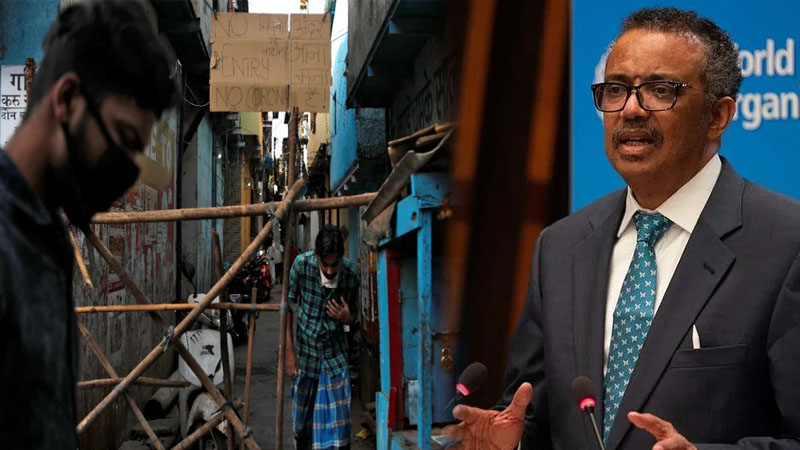 In a major boost to the BrihanMumbai Municipal Corporation and Maharashtra government's morale, the World Health Organisation (WHO) has lauded their success over the Covid-19 outbreak in Dharavi - Asia's largest slum.

WHO Director-General Tedros A. Ghebreyesus, at a press conference late on Friday, referred to the achievements made in the Dharavi among other similar examples globally.

"Even in Dharavi, a densely packed area in Mumbai, a strong focus on community engagement and the basics of testing, tracing, isolating, and treating all those that are sick is key to breaking the chains of transmission, and suppressing the virus," Ghebreyesus said.

In this context, he pointed out that there are many, many examples from around the world that have shown that even if the Covid-19 outbreak is very intense, it can still be brought back under control, as in Vietnam, Cambodia, Thailand, New Zealand, Italy, Spain, and South Korea.

Responding quickly, the BMC said: "Thank You, WHO for acknowledging #Mission Dharavi where it partnered with citizens to 'Chase the Virus' from one of the most populous blocks of the city".

"With your guidelines and Mumbai's community efforts, we will beat Covid-19 one block at a time by Tracing, Tracking, Testing and Treating," the BMC's return tweet said.

Ghebreyesus also stressed the need for community participation and collective solidarity - akin to Chief Minister Uddhav Thackeray's appeal two days ago for forming Corona Vigilance Committees right down to the village levels and asking NGOs to adopt Mumbai slums with the public partnership to beat the Coronavirus.

Also Read: Economy showing signs of getting back to normalcy: RBI Governor

Reacting to the WHO DG's comments, Health Minister Rajesh Tope admitted that "we have worked very hard from day one along with the people of Dharavi" and even in Malegaon, Nashik, and now the results are showing in both places.

He said that in both places, "we have managed to flatten the curve, we don't expect it to worsen any further, but we also can't take chances so will continue to remain vigilant".

Education Minister and MLA from Dharavi Varsha Gaikwad said she was "proud of all Dharavians.. as today they have set an example for the world.

"WHO has recognized and praised our efforts against this war (vis-A-vis) Corona... Let's keep up the good work and we will fight in the strongest way," a thrilled Gaikwad tweeted.

The WHO head also cautioned that from countries where there is exponential growth to places that are loosening restrictions, are "now starting to see cases rise".

For this, Ghebreyesus assured that WHO will continue to work with partners to ensure that the poorest and most marginalized are prioritized.

"That means restarting routine immunization and ensuring that medical supplies reach health workers across the world Only aggressive action combined with national unity and global solidarity can turn the Covid-19 pandemic around," Ghebreyesus asserted.

After the success in Dharavi -- chronicled in a series of reports by IANS over the past three months -- the model is being replicated in north Mumbai where there has been a huge spike in recent weeks with a public-private-partnership.

Get the latest update about True Scoop, check out more about English News, WHO, Top National News & WHO Lauds BMC Efforts Over Covid Outbreak