Who is Afreen Fatima? The 'Mastermind' behind Prayagraj violence, Javed’s daughter's connection with JNU?

Javed Mohammad's daughter Afreen Fatima studies in JNU and Afreen Fatima's strings are also being connected with the Prayagraj riots. Despite this, students belonging to the JNU Students' Union are protesting in support of Afreen Fatima. 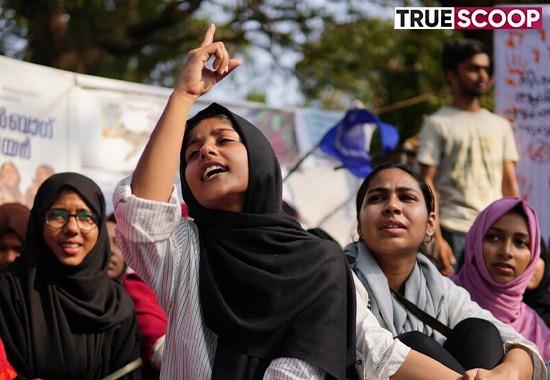 Prayagraj Violence: Protests started at Jawaharlal Nehru University, Delhi after a bulldozer was run on Sunday over the house of Javed Mohammad, who is said to be the mastermind of the violence that broke out in Prayagraj.
Javed Mohammad's daughter Afreen Fatima studies in JNU and Afreen Fatima's strings are also being connected with the Prayagraj riots. Despite this, students belonging to the JNU Students' Union are protesting in support of Afreen Fatima.
According to the information received, Afreen Fatima is the elder daughter of Javed Mohammad, who lives in Delhi. Afreen studies at Jawaharlal Nehru University (JNU). Apart from this, Afreen Fatima is the counsellor of the student union at JNU. Earlier, Afreen had also participated in the protest against CAA. Even during the movement in Shaheen Bagh, Afreen Fatima was active from JNU to Allahabad.
In the search operation after the Prayagraj riots, objectionable items have been recovered from Javed Mohammad's house. Afreen took part in protests in many cities of South India during the hijab ban. Afreen was born in Prayagraj. After graduating, she took admission in Aligarh Muslim University. During her studies, she also became active in student politics.
Also Read: Prophet Mohammed row: From Delhi to Kolkata, Mass protests erupt after Jummah prayer; Stone pelting & more
Shashi Tharoor's support for Afreen
Congress leader Shashi Tharoor has also supported Afreen by tweeting. Tharoor wrote in his tweet, "Shocked to hear the news coming from JNU that student's family house has been vandalized. Action under due process of law is a fundamental right in a democracy. Under which law and what procedure to follow. Demolition has been done while doing UP has exempted itself from the Constitution of India?"
The case against 255 so far in the Prayagraj violence case
Prayagraj Police has informed that so far a case has been registered against 255 named and 5000 unknown people in connection with the violence that broke out in the city. SSP told that Javed Mohammad's daughter Fatima studies in JNU and works to give an opinion to Javed Mohammad. If Fatima is also found guilty in the case of violence, she will also be taken into custody.
So far 255 people have been arrested in connection with the violence after Friday prayers in various districts of Uttar Pradesh. Additional Director General of Police (Law and Order) Prashant Kumar said, "255 people have been arrested in this connection in the state. In this, Firozabad 13, Ambedkar Nagar 28, Moradabad 27, Saharanpur 64, Prayagraj 68, Hathras 50, Aligarh 3, Jalaun 2, are included."