Who is the girl with Rahul Gandhi in Pub? Many claims regarding mystery girl

Rahul Gandhi is seen having a conversation with a woman in a viral video. On social media, a lot of claims have been made about this. 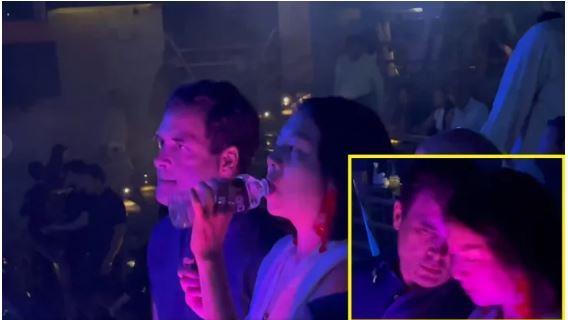 Several Bharatiya Janata Party leaders including Amit Malviya, Kapil Mishra, and Shehzad Poonawalla, on Tuesday, May 3, tweeted a video of Congress MP Rahul Gandhi at a nightclub in Nepal. In this, he is seen in a nightclub in Kathmandu. After this, the videos went viral on social media. The videos are from Lord of the Drinks, Nepal.
Simultaneously, the woman seen in the video with him in the pub is being outlined as the Chinese Ambassador to Nepal on social media. Meanwhile, Congress has claimed that Rahul has gone to a friend's wedding and that attending a wedding ceremony is not a crime.
Sharing this video, Union Minister Kiren Rijiju has written that regular parties, holidays, private foreign trips are not new to the country. As a common citizen, there is no issue but when an MP, permanent owner of a national political party who preaches to others.....
On social media, a lot of claims are being made. Whether Rahul Gandhi is partying in Kathmandu with the Chinese Ambassador to Nepal Hou Yankee, Rishi Bagri wrote on Twitter. In another tweet, it is written that Chinese Ambassador Hou Yankee is modeling for Nepal tourism.
BJP MP Manoj Tiwari tweeted the video and wrote that the party is still left. The party, not the family, is in crisis. Rajasthan is burning, but Rahul Gandhi is doing the party, according to BJP spokesperson Shahzad Poonawalla. Rahul is a full-time politician rather than a part-time politician. This isn't the first time this has happened. Remember their party mode on November 26th?
According to reports, Congress leader Rahul Gandhi arrived in Kathmandu on Monday. The former Congress President was accompanied by three other persons as he landed at the Tribhuvan International Airport in the afternoon.

Also read:  BJP slams Rahul Gandhi for partying in Kathmandu in a bar, asks 'Party Over?'
Rahul's friend Sumnima Udas is getting married to Nima Martin Sherpa. Her father, Bhum Udas, served as Nepal's ambassador to Myanmar. A formal reception will be held on May 5 at the Hyatt Regency Hotel in Budha. Rahul Gandhi is staying with his friends at the Marriott Hotel in Kathmandu.