Who is Vir Das? Know why story behind #VirDas trends on twitter 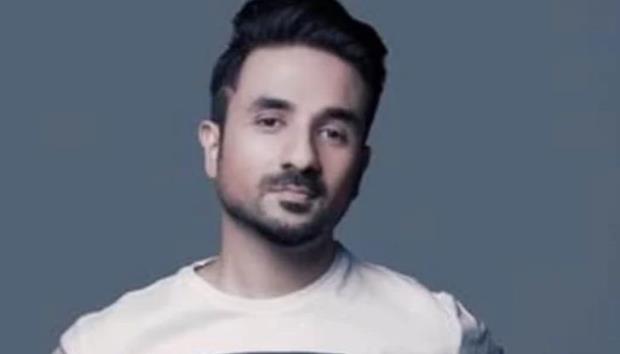 Vir Das is an Indian comedian, actor and comedy musician. He is quite famous for his stand-up comedy.  In 2017, he acted in the Netflix special Abroad Understanding. Das has performed in approximately 35 plays, over 100 stand-up comedy shows, 18 films, eight TV shows and six comedy specials. He has written comedic columns for Femina, Maxim, Exotica, DNA and Tehelka. In 2019, he made his debut in American television with the television series, Whiskey Cavalier.

Vir did his schooling from Indian Language School. Vir Das is a graduate in economics. He married his girlfriend of 5 years, Shivani Mathur, in October 2014.

Vir Das landed in controversy after a video edited from his recent performance in the US went viral on social media. After the video went viral, he is being called anti-national. During his performance, Vir talked about some of the pressing issues in the country, such as the battle against the coronavirus pandemic, rape cases, a crackdown against comedians and farmers’ protests.

Check out the entire video of his poem here:

After being shared, the video went viral online, triggering a debate on social media. While some of the people slammed the comedian for his remarks, some lauded his brave stance.

Check out the mixed reactions of Netizens on twitter: 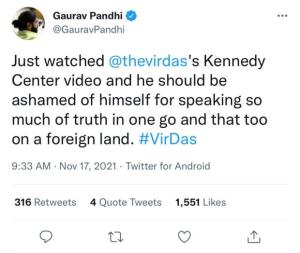 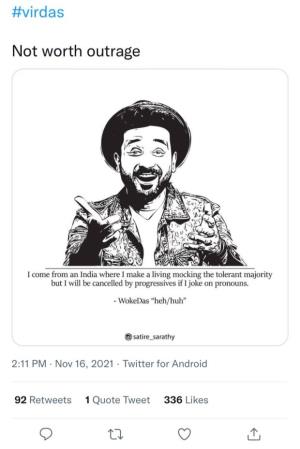 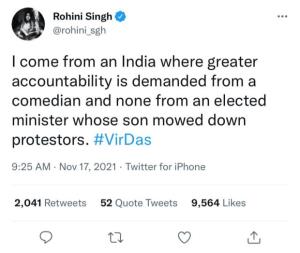 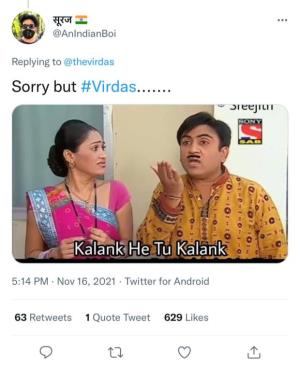 In clarification to his video, Vir Das gave a statement on this case by saying,

"The video is a satire about the duality of two very separate Indias that do different things. Like any nation has light and dark, good and evil within it. None of this is a secret. The video appeals for us to never forget that we are great. To never stop focusing on what makes us great. It ends in a gigantic patriotic round of applause for a country we all love, believe in, and are proud of. That there is more to our country than the headlines, a deep beauty. That's the point of the video and the reason for the applause," Vir Das said in his statement.

He requested people to "cheer for the country with hope, not hate" and asked his followers to not be misled by edited clips.

"Please do not be fooled by edited snippets. People cheer for India with hope, not hate. People clap for India with respect, not malice. I take pride in my country, and I carry that pride across the world," he said.

Apart from this, Citing the video as “venomous and inflammatory”, the lawyer, Ashutosh Dubey, wrote an email to the Mumbai Police Commissioner seeking registration of an FIR against Das.