Why the government should hold talks with the masses before rolling out a scheme like Agnipath officially?

Government jobs are the only hope for the vast army of jobless youth especially in rural India, whose families are also hit by rising food and fuel prices. But, the Modi government has not filled up lakhs of vacancies yet 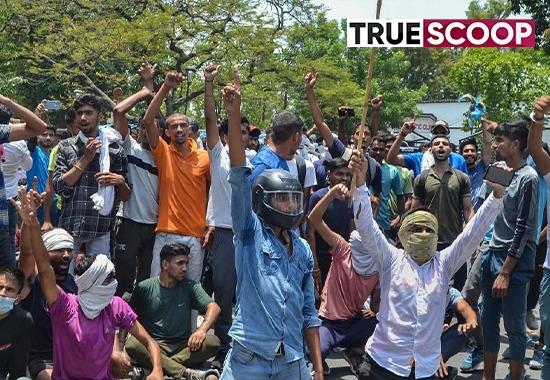 Agnipath Defence Policy Reform is a government scheme launched to recruit young men and women in the Indian Armed forces.
The Agnipath scheme was announced by the defence Minister Rajnath Singh on tuesday June 14th 2022. But scheme came up with few amendments as well in following days.

Talking with True Scoop,  a section of people in the society give their view  about this scheme, and help us to understand what people think at large?
Why youth feels that there is always communication gap between people and higher authorities?

Naresh Kumar, Parent says" It is a fact that there is growing unemployment among rural youth, MGNREGA jobs are also becoming tough, especially after reverse migration following the sudden and poorly thought out pandemic-induced lockdown."

"Job losses in urban areas and falling wages in the informal sector as well as the private sector have also led to a large number of youth taking to exploitative gig economy jobs."

"Government jobs are the only hope for the vast army of jobless youth especially in rural India, whose families are also hit by rising food and fuel prices. But, the Modi government has not filled up lakhs of vacancies yet and schemes like Agneepath also fail to achieve that."

Gurucharan Singh, Professor says" With the Agneepath Govt Scheme, a younger and a bigger youthful profile of the armed forces will be achieved. Right now the army recruits youths for a short service commission for an initial tenure of 10 years.

" This 10-year tenure is extendable to 14 years of service.The government stated that the system will come into immediate effect and will govern the enrollment for the 3 services- Army, Air Force and Navy. This statement implies that the existing framework of the enrolment of the soldier will still exist."

Aman Singh, an aspirant says"The Armed Forces are the most coveted jobs, as these come with good perks, such as subsidised health, food, education and retirement benefits. Families spend a lot on educating and coaching their children to get these jobs as these assure them a lifetime of security. That hope is crashing now."

"We work hard to get inducted into the Armed forces. How will the service be for four years, with months of training and leaves? How will we protect the nation after getting trained for just three years? Govt has to take back this scheme,”

Sudhish Sharma, Student says"We submitted our forms for the recruitment in the army in February 2020 but the process started a year later due to COVID-19 outbreak. The written test was initially scheduled for April 25 last year but was postponed several times. Now they want us to start from scratch again?"

Shubham, an aspirant says" This government is playing with our future. We want our selection as per the old recruitment scheme as we have already cleared the physical and medical tests last year. Decision to inculde 23 years of age as well  after launching scheme shows how government fails to communicate with masses on Intial level."
Also Read: Who is Manmohan Mohana? Man who 'did recce' of Moosewala had a connection with Congress' Raja Warring

Concerns Regarding the Scheme:
Present benefits and security of jobs will be lost: Recruits will not get permanent jobs or promised pension and health benefits even after retirement.
Doubt about training: 6 months of short training may not be enough to trust them with the same kind of tasks that current troops can be trusted with.
Erosion of loyalty: “All India, all class” recruitment to the services may lead to the erosion of the loyalty that a soldier has for his regiment.