In Punjab's Gurdaspur's Kahanuwan Chowk, a woman fiercely did a high-voltage drama. 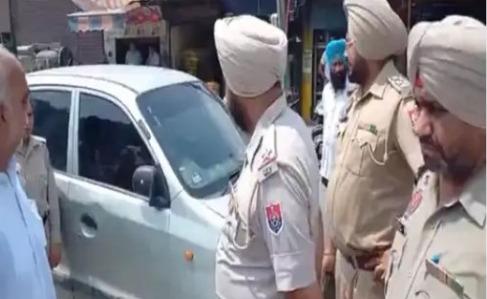 In Punjab's Gurdaspur's Kahanuwan Chowk, a woman fiercely did a high-voltage drama. This woman's car had Jade Black windows. The police stopped the car on this suspicion. The woman was to be questioned by the police and police asked her for paper but the woman locked herself inside.

As soon as the police got closer, she would also close the mirrors. This drama went on for about an hour. In the end, the Ladies Police were able to open the car in some way. Till then there was a long jam on the road. The woman and the police both accused one another of acting inappropriately during this time.

The woman said that she was going to the hospital. The children fitted the Jade Black Glasses in the vehicle. The car is in their name which they bought from Chandigarh. The woman accused the police of making her late for the hospital. There was no Naka, according to the woman. When she brought the car ahead, the police chased and stopped her.

The woman does not have any paper, according to the police officers on the scene, and the windows are covered with black film. If asked, she locks the car. Police asked repeatedly, but the woman was unresponsive. No one can be seen inside the black film, according to the police. The woman wasn't prepared to remove the film or show the paper. They stopped the car only after seeing the black film.