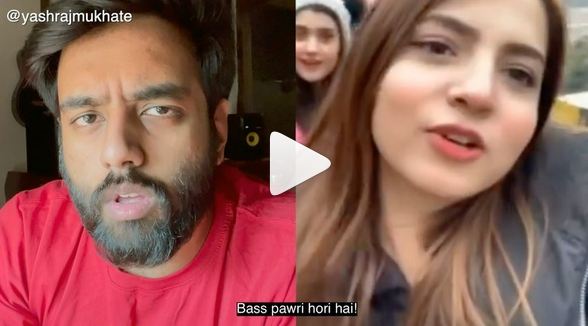 Social networking sites everyday get buzzing content from its active audience who are no more passive consumers but also producers. A girl from Pakistan became viral with a video she posted on her Instagram account.

Dananeerr posted a video on Instagram where she was seen enjoying with her friends. She wrote, "When borgors visit northern areas: yeh hamari pawri horai haai - This is the gold content you guys signed up for. 10/10 meme material. #pawrihoraihai"

Dananeerr in the video said, "This is our car, this is us and our party is going on (ये हमारी कार है, ये हम हैं और ये हमारी पॉरी (यानी पार्टी) हो रही है.)". In a nearly four second video, she is introducing herself dancing with her friends by shooting a video and showing their car. Moreover, her saying "pawry" instead of party has social media users hooked to it.

Yashraj Mukhate is a famous singer who uses videos, as simple and conversational videos on social networking sites and mash up them into a song. He found an opportunity to convert the video into a musical.

Mukhate took to Instagram and posted a new music video of the #Pawrihoraihai girl. He wrote, "Aajse me party nahi karunga sirf pawri karunga. Kyuki party karneme wo mazaa nahi jo pawri karneme hai. Thanks @saudchaudary and all the people who sent me this video in the DM. And a big shoutout the pawri girl @dananeerr. #yashrajmukhate #pawrihorihai #pawrihoraihai #musicproduction #dialogue with beats."

Mukhate's many videos have gone viral across India and world. He is best known for his video on popular show "Saath Nibhana Saathiya's Rasode Mein Kon Than." The way he blends music into the conversations and memes on social networking sites, it engages the audiences.

Meanwhile, both Mukhate and Dananeerr's videos have been seen by many people in Pakistan as well as in India.

Get the latest update about Soial networking, check out more about India, Pakistan, Instagram & Viral