The series is a crime thriller released on Netflix on January 14. 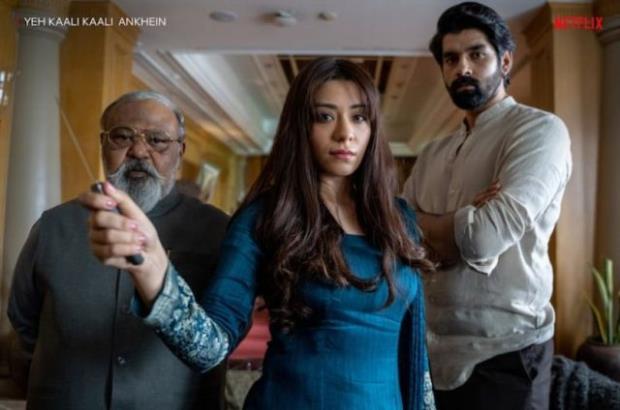 Tahir Raj Bhasin, Shweta Tripathi and Aanchal Singh starrer web series 'Yeh Kali Kali Ankhein' is a crime thriller. The series released on Netflix on January 14. The title of the films reminds us of a famous song picturized on Shahrukh Khan, Kajol and Shilpa Shetty in the movie ‘Bazigar’.
The web series also stars Saurabh Shukla, Brijendra Kala and Arunoday Singh in lead roles.
Storyline
The series is a drama based on the Vikrant ( Tahir Raj Bhasin) a small town boy from Onkara, an engineering graduate and his lady love Shikha (ShewtaTripathi).Their life gets shattered when Vikrant becomes the victim of Purva (Anchal Singh) daughter of big shot local politician Akheraj (Saurabh Shukla) who will do anything to marry Vikrant.
Vikrant’s father serves Akheraj as his accountant and has blind faith in him. Vikrant has to deal with serious consequences of their faith and had no power to disobey him. Drama starts when Purva meets Vikrant and turning the man into victim and the woman into the offender. Purva uses his father’s money and power to create chaos in Vikrant’s life.
Vikrant was forced to get hitched with Purva. How money, power and obsessive love destroy man’s life forms the crux of the story.
Also read: Sree Vishnu, Amritha Aiyer's action thriller 'Arjuna Phalguna' set for Republic Day OTT premiere
Here’s why Yeh Kaali Kaali Ankhein is a failed attempt of Netflix to make a series like ‘Mirzapur’:
It’s like a Gorakhpuria story: In many ways, Akheraj resembles Harishankar Tiwari. The series is based on UP, but the number of vehicles does not belongs to UP.
A clumsy series: This series is a clumsy series as it seems that the makers of the film are unaware about Uttar Pradesh politics.
An average series: It is a one-time watch as the screenplay of the story is quite weak. The characters lose their grip on the storyline. It seems to be a disappointment for audience as they might find it useless to watch all eight episodes of the series.
If you are a fan of series like ‘Sacred Games’ or ‘Mirzapur’ then watch Yeh Kaali Kaali Ankhein without expecting same drama like those series. Yeh Kaali Kaali Ankhein fails to deliver a raw and nasty content to its viewers.