“If I Get Good Food, I Eat It From Anywhere” : Kartik Aaryan 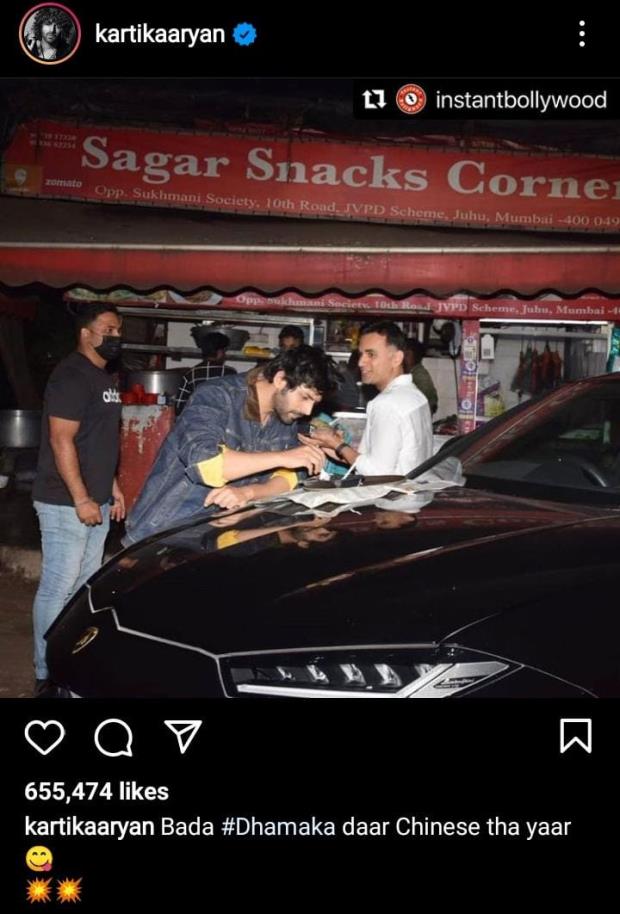 Bollywood actor Kartik Aaryan is now gearing up for the release of his upcoming film Dhamaka. The actor is now going places to promote his film but on Sunday he did something that put him on the list of trends and for all the good reasons.

Kartik visited the sets of Salman Khan’s reality show Bigg Boss 15 to promote his film. On his way back he stopped by at a roadside Chinese food stall and ordered fast food for himself and his acquaintance. He was seen eating the food on the bonnet of his recently purchased black Lamborghini. Pictures of Kartik Aaryan eating in front of a Chinese food stall is going viral on social media and it has impressed the internet. Many called the actor “down to earth” and “simple.” A fan club shared the picture and some of the comments read “he is so down to earth” and “he is such a simple human being #simplicityrocks.”

Kartik Aaryan has reacted to the pictures. During a conversation, he said that it was not a one-off incident and he often eats street food. Kartik said, “I’d gone out to eat. I’m a foodie. I eat street food whenever it gets late. There are some places I regularly eat from and have been visiting for years now. It happened by chance that photographers came along that night and they caught the sight of me. I love such places. If I get good food, I eat it from anywhere.”

Also Read: Salman Khan Has This Reason To Skip Katrina Kaif & Vicky Kaushal’s Wedding, But Is It A Legit One?

Previously Kartik Aaryan was in New Delhi to promote his Netflix film Dhamaka. Talking about his fandom in the heart of India, he said, “This city is like a second home to me. Mumbai, Gwalior and Delhi are the three cities I have lived most of my life. I love to come here often. I love the food here. There is so much warmth in the people here. I get to know the true value of fans coming here. There are a lot of fan clubs in Delhi and they often invite me here. I love it here.”