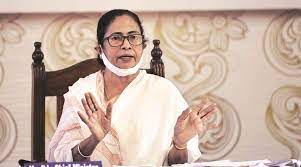 West Bengal Chief Minister Mamata Banerjee will hold a meeting with party leaders in headquarters in Kolkata later today. Yesterday she won a two-thirds majority defeating BJP and Congress-Left alliance in the state.

With the Trinamool Congress poised to cruise to a landslide victory in the Assembly elections to return to power for the third time in a row, Chief Minister Mamata Banerjee on Sunday dedicated the win to the people of West Bengal, besides taking a dig at both the Election Commission and the BJP.