Sooryavanshi Is Collecting Double Of Bunty Aur Babli 2 Despite Being In Third Week!

Box Office Update: Today, both films will see a dip in numbers though due to the arrival of Satyameva Jayate 2. 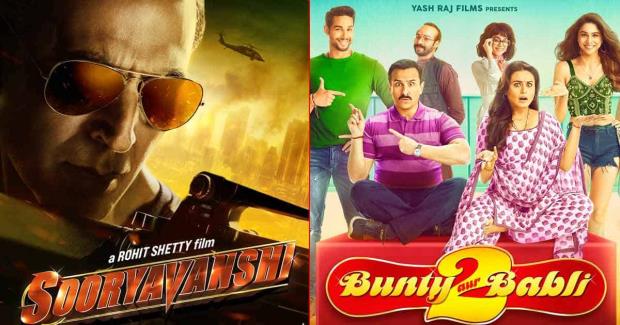 Despite being in its third week, Sooryavanshi is now collecting double of Bunty Aur Babli 2 during the weekdays. If the weekend was quite good for the Akshay Kumar starrer and pretty disastrous for the Saif Ali Khan and Rani Mukerji film, the weekdays have only extended this gap all the more.

This was seen on Wednesday when the Rohit Shetty-directed film collected 1.50 crores* more whereas Aditya Chopra’s Bunty Aur Babli 2 struggled to bring in even 75 lakhs*. That pretty much brings things in perspective since the action entertainer has been much liked by the audiences whereas the con comedy hasn’t even been given a chance.

As a result, Sooryavanshi has now accumulated 183.68 crores* while Bunty Aur Babli 2 has merely gone past the 10.50 crores* mark. Today, both films will see a dip in numbers though due to the arrival of Satyameva Jayate 2. The impact would be felt more (in relative terms) by Sooryavanshi since it too caters to the massy single screens audience.

Had Bunty Aur Babli 2 been an accepted film then it wouldn’t have been impacted as much since it was anyways made for multiplexes. However in absence of that, whatever little also that it would be losing at the box office due to the arrival of Satyameva Jayate 2 will cause it a pinch.