Over 600 farmers protesting at the borders of Delhi have passed away but no solution seems to arrive. 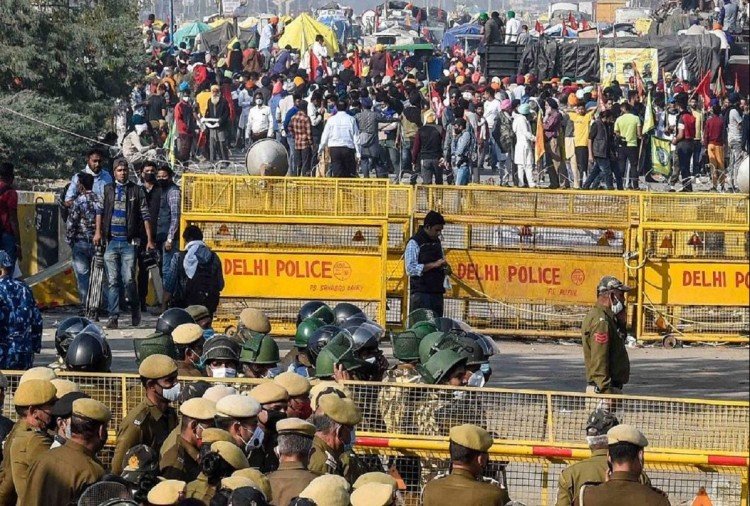 Facing severe heat, winters, heavy rains and thunderstorms, thousands of farmers demanding the repeal of farm laws passed by the government last year remain undeterred and continue their protests on the outskirts of the national capital.

Today, one of India's longest and strongest agitation- the farmers' protest completes 11 months. Tortured by police, crushed with vehicles of BJP politicians and witnessing violence despite a peaceful protest, the agitating farmers stand face to face to Modi government and demand "black laws" to be repealed.

Over 600 farmers protesting at the borders of Delhi have passed away but no solution seems to arrive. Here are the 11 months into farmers' agitation.

Farmers from Punjab arrived at the Singhu and Tikkri border on November 26, 2020, following a standoff with Haryana police and have been staying there ever since.

Thousands of protesters gathered on Delhi's roads and the government appeared tough. With farmers indicating that they are willing to accept a written guarantee on the Minimum Support Price (MSP) the administration lowered its guard and proposed to alter the agriculture laws. However, farmers' unions hardened their stance as the "government took too much time to act."

Due to the obvious lack of confidence in the talks between the government and the farmers' unions, every round of negotiations has ended in failure since.

Government on its controversial laws

The government has insisted that the three farm laws, which were enacted by Parliament in September after being adopted through Ordinance in June, are targeted at improving agriculture and promoting agricultural goods.

The administration has responded to the protesters by claiming that the laws apply to farmers not only in Punjab, Haryana, and western Uttar Pradesh but also in other states.

Farmers' protests are seen by the government and the BJP as an agitation by critics of Prime Minister Narendra Modi's government who are hiding behind the farmers.

There have been several incidents of violence during ongoing farmers protest. In some cases, farmers broke through police barricades while in other police lathi-charged on them.

At the beginning of the year 2021, violence broke out near red fort in Delhi on the occasion of Republic day.

On January 26, farmers protesting against new agriculture laws in India broke through police barricades around the capital and entered the historic Red Fort in Delhi.

After hundreds of thousands of farmers marched on the capital on tractors or horses, police used batons and tear gas to disperse the crowds. During the clashes, one protester was reported dead, and hundreds of police and protesters were injured.

In several parts of Delhi, mobile internet connections were suspended, and some metro stations were also closed.

At least nine people including four farmers were killed in the violence on October 2 in Uttar Pradesh. Farmers were peacefully protesting against BJP leaders scheduled to arrive in the region when the son of Union Minister Ajay Mishra Teni, Ashish allegedly crushed protesters with his vehicle.

Following the incident, violence broke out in which a person was lynched and vehicles were set ablaze.

The son of minister remains in police custody and an investigation is underway. However, the Supreme Court of India has expressed displeasure over the investigation done by UP police, a special investigation team and the state government.

These are just two examples of violence during farmers protests. The list of incidents featuring violence against protesting farmers stands many.

A conspiracy to defame farmers protest?

A 35 year old man identified as Lakhbir Singh was brutally murdered on the Delhi-Singhu border on October 15. His body was found tied to an overturned police barricade at the farmers' protest site with his left wrist chopped and a pool of blood on the ground.

Nihangs, a 'warrior' Sikh group took the responsibility of murder at farmer protest. Nihangs alleged desecration of Guru Granth Sahib by the man, following which they thrashed him, severed his hand and leg and left him to die.

Soon after the incident was reported, a crowd of netizens and media houses started declaring protesting farmers as terrorists and murderers. Despite farm unions alleging no connection with the man and Nihangs involved in the killing, the protest was defamed.

However, a day after pictures of Nihang head had gone viral on social media indicating a deep rooted conspiracy to demean the long-standing farmers protest.

When will agitation end?

The agitation plays a major role in upcoming assembly elections in 2022. Opposition parties will try their best to make the centre repeal the farm laws.

However, the Centre stands firm supporting its decision of agricultural laws.

But senior Punjab politician Captain Amarinder might emerge as the hero. After being ousted from the chair of CM in Punjab, the leader has announced a new party. He also stated that his party will be open to alliance with BJP if the farmers' issue is resolved.

Currently, BJP stands no chance in Punjab. But if it allies with Capt Amarinder’s party there is a possibility of the BJP coming to power.