The newspaper advertisement invited graduates for walk-in interviews on Tuesday from 10 AM in Tamil Nadu’s Madurai. 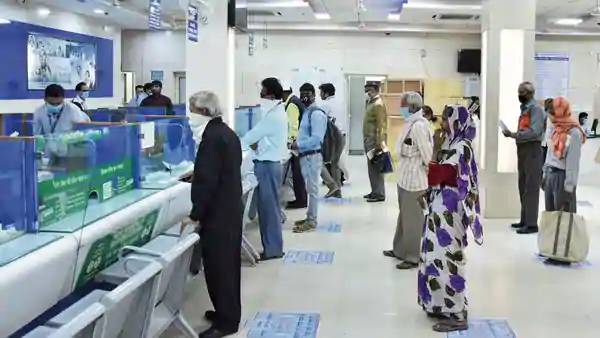 It has been a year since learning has been shifted to online mode and students are sceptical about how things will turn out to be for them regarding their career. Those who have graduated in 2021 are anxious about their career and looking at the falling economy and employees being laid off adds on to their worry.

At such time an advertisement published by a private bank has created alarm amongst the netizens.

“2021 passed out candidates are not eligible” read a line in the advertisement, that invited graduates below the age of 28 for a walk-in interview in Tamil Nadu’s Madurai. The role was of a Branch sales officer. 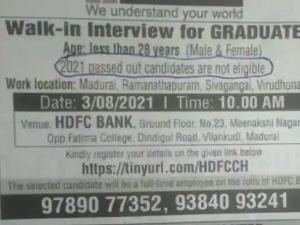 Soon when the ad became viral, the concerned private bank issued a clarification, expressing its regret regarding the matter.

An HDFC Bank spokesperson told the media, “This is a typo and we regret the error. Graduates can apply irrespective of the year of passing as long as they meet the age criteria.” The clarification also added that the right advertisement regarding the walk-in interview was also published in the newspaper, which invites graduates for the walk-in interviews and reads “2021 passed out candidates are also eligible”.

It was known that the agency that was conducting the recruitment drive had not followed the set procedure while issuing the initial advertisement.

The recruitment drive took place on Tuesday in Madurai where candidates who have graduated this year have been amongst those who appeared for the job interview.

This advertisement has gone viral on social media platforms.

This advertisement agitated many when students who are worried about their future and memes referring to the 2021 batch as “Corona batch” is circulated.