Rinda along with other 'Khalistani' terrorists, was tasked with the revival of terrorism in Punjab. 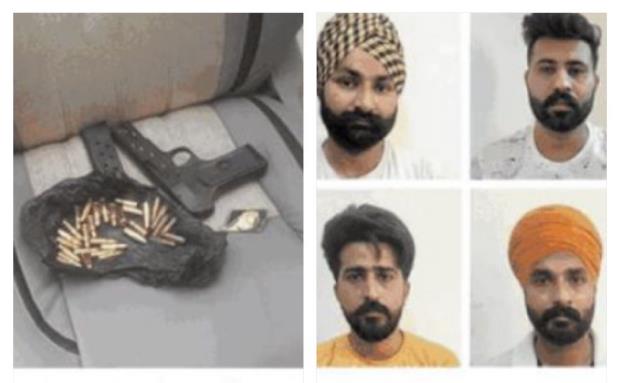 Police arrested 4 Khalistani terrorists from the National Highway in Karnal district of Haryana on Thursday morning. The four arrested terrorists were passing through the highway in an Innova vehicle. The Intelligence Bureau (IB) had informed about this.
The four arrested terrorists Gurpreet, Amandeep, Parvinder and Bhupinder are residents of Punjab. Of these, three are from Ferozepur and one from Ludhiana. Their age is around 20 to 25 years. It is being told that all the four terrorist organizations are associated with Babbar Khalsa.
During investigation, one country-made pistol, 31 cartridges, cash worth Rs 1.30 lakh, 3 iron containers have been recovered from the terrorists. The team has got them X-rayed, in which the explosive has been confirmed.
SP Gangaram Punia said that these four terrorists were associated with Harvinder Singh alias Rinda. He had sent these weapons from Pakistan to Ferozepur through drones. In return, all four had to get a hefty amount. Even before this, the accused have delivered such consignments to Nanded.
Also read: Punjab Power Crisis: BJP leaders stages a 'Dharna' in Amritsar
Besides these, Rinda is facing more than a dozen criminal cases in Punjab and Maharashtra. After entering Pakistan, Rinda along with other 'Khalistani' terrorists, was tasked with the revival of terrorism in Punjab.
Haryana Chief Minister Manohar Lal Khattar said, "The arrested suspects are associated with a terrorist organisation. According to the input received from Punjab, they have no relation with Haryana."