Aam Aadmi Party (AAP) MLA from Kharar, Anmol Gagan Maan sat on the chair of Kharar's DSP on Saturday, 18th June as someone took a picture of it and made it viral on social media. 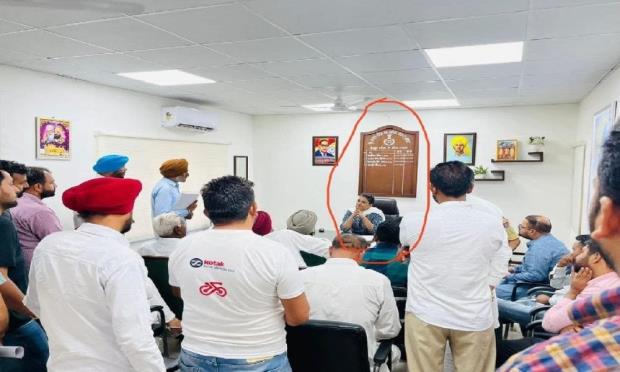 Aam Aadmi Party (AAP) MLA from Kharar, Anmol Gagan Maan sat on the chair of Kharar's DSP on Saturday, 18th June as someone took a picture of it and made it viral on social media. Now the AAP MLA is being pulled up a lot on social media for this. People are calling this attitude of the MLA a humiliation of power. However, there has been no response from MLA Anmol Gagan Maan on this.
The MLA had come to listen to the problems, the MLA of the Aam Aadmi Party had come to Mullapur Garibdas a few days ago to listen to the problems of the people. She had come with a complaint regarding the land being acquired. At that time the DSP was not in the office. It is being said on social media that AAP MLA does not know the protocol. Congress also taunted that they do not take over their chair and sit on the chair of others.
Also Read: Ludhiana: Deputy Commissioner urges residents to take Covid seriously as number of patients are increasing
In this regard, DSP Amandeep Singh said that he was not in his office at the time he was talking about. The MLA listened to the complaint while sitting on his chair, he is not aware of it.
Punjab's journalist Man Aman Singh Chinna has shared this photo on his social media handle. According to Man Aman, AAP's MLA Anmol Gagan went to the DSP's office in Kharar and sat on his chair. The journalist has not only called it wrong but has also advised the officer not to leave his chair.
Under the rules, no one else is allowed to sit on the chair of an officer. The chair itself is the mark of that officer's post, but the MLA of the Aam Aadmi Party may not know about this rule or else she sat in the throes of power and did this work. However, as soon as the photo went viral, users on social media started reprimanding the MLA. People left no stone unturned to taunt the party leaders who claimed to be the government of the common man.